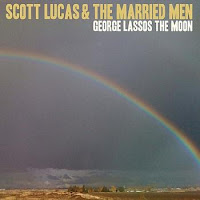 Scott Lucas & the Married Men: George Lassos the Moon (G&P)--Like the songs, the jokes are subtle. The album title, for instance, comes from a wall hanging in It’s a Wonderful Life, but none of the songs allude to ringing doorbells, angels getting their wings, or defaulting banks. The song titles are funny too (“You Put a Spell on Me,” “Get Up! You Damn, Dead Horse”), and one of the Married Men, the violinist Rebecca Brooke Manthe, is a woman. Meanwhile, speaking of marriage, there’s something borrowed (Bob Dylan’s “Positively 4th Street”), something blue (lyrics that intensify the pun on Robin Hood’s Merry Men by sounding distinctly unmerry), and a sound that, for better and for worse, is as quiet in its ’til-death-do-us-part introspection as the sound of Scott Lucas’s former band--Local H--was loud.

Chico Mann: Analog Drift (Wax Poetics)--There’s a lot of genre-mashing going on in this fifty-four-minute party record. For starts, several of the fast songs borrow the paisley-funk grooves of Sheila E.’s “The Glamorous Life” before losing them amid the percussive noise of what sounds like a block party thrown in a futuristic barrio on the outskirts of a gated neighborhood inhabited by slum-Chihuahua millionaires with good taste in bells and whistles. The exact location is unclear, but if the global positioning suggested by the synth riff running through the final minute or so of “Hay Que Correr” is accurate, the nation is definitely under a groove. Do they still play Caucasian classics like Talking Heads’ “Once in a Lifetime” in the future, you ask? Oh my, yes. And same as it ever was it isn’t.

Marillion: Less Is More (Eagle)--As none of the eleven listed instruments used on this album (twelve if you count “strings”) uses electricity, the title obviously should’ve been Unplugged. So why wasn’t it? Probably because unplugging was mainly a 1990s fad and, as the title of Track Eleven proclaims, “This Is the 21st Century.” Then again, progressive rock, the genre of which these Brits are a prime latter-day example, was mainly a 1970s fad (1960s if you count pre-Ian Gillan Deep Purple), so why should these twenty-first-century men slog through this de facto best-of at all? That they do so at volumes apparently intended not to wake the baby only points up the pretentiousness of the lyrics (big surprise) and the similarity of lead singer H’s voice to David Pack’s. (Whatever did happen to Ambrosia?)
Posted by The Arse Man at 9:18 AM