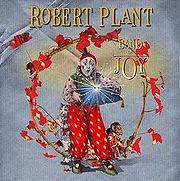 For the second album in a row, Robert Plant, who was once the favorite target of anti-rock evangelists everywhere owing to his band’s alleged sympathy for both the devil and pescatarian groupies, has put himself in the hands of a Christian producer. Last time it was T-Bone Burnett, who oversaw Plant’s 2007 album with Alison Krauss, Raising Sand. This time it’s Buddy Miller, who when he steps out of his role in Emmylou Harris’s band and records with his wife Julie, has been known to put his name on some very bare-knuckled roots- gospel indeed.

So maybe it was inevitable that, just as Raising Sand included the implicitly gospel “Sister Rosetta Goes Before Us” and “Your Long Journey,” Band of Joy would include something along those lines. But who’d have thought those lines would’ve intersected at ninety-degree angles to form a crossroads where Plant would stand and deliver a spooky, deeply heartfelt, banjo-accompanied rendition of “Satan Your Kingdom Must Come Down” suitable for the midnight hour? “I’m gonna pray ’til they tear your kingdom down,” he sings, and even played backwards it contains nothing more subliminally sinister than “Numb knee yum yuck is.”

Every bit as spooky is Plant‘s version of Low’s “Silver Rider.” And it’s almost every bit as gospel too if the Mormon faith of the song’s composer, Alan Sparhawk, counts (and if the Silver Rider is a Christ figure and not a Fantastic Four character). Amid evanescing clouds of numinous electric guitars, Plant and Patty Griffin (who is at least adequate as an Alison Krauss understudy) compress their yearning to be raptured into hushed whispers that will send shivers down the spine of anyone who has one. Even “Cindy I’ll Marry You Someday” has a line about getting religion.

But Band of Joy isn’t all eerie otherworldliness. A jaunty, rumbling take on the Los Lobos lullaby “Angel Dance” kicks the album off while simultaneously establishing the project’s spiritual tone (even if the dancing angel is the singer’s child and not a cherubim or seraphim on the head of a pin). And the transformation of Barbara Lynn’s “You Can’t Buy My Love” into a ramshackle hoedown will have tattooed chicks who reek of patchouli shaking what their mamas gave ’em.