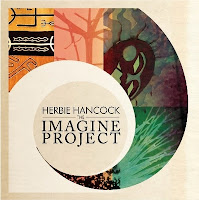 If, as Robert Christgau once wrote, “Amazing Grace” is the “Send in the Clowns” of roots music, then John Lennon’s “Imagine” is the “Amazing Grace” of hippie utopianism, and Herbie Hancock doesn’t do it any favors by distending it to seven minutes and twenty seconds, entrusting the singing to Pink, Seal, and India.Arie, and nimbusing the resulting vapor with his downy-soft piano. Even Jeff Beck’s solo lets sleeping dogs lie. And similarly otiose arrangements of Bob Dylan’s “The Times They Are A-Changin’” (eight minutes) and Sam Cooke’s “A Change Is Gonna Come” (nine) only compound the effect. Not for nothing does Hancock close the album with a track called “The Song Goes On.”

See, when bromidic protest anthems work, they do so by getting things over with as quickly as possible. Hancock, on the other hand, luxuriates in them, knocking out walls and hiring feng shui experts to choose and arrange both the furniture and the exotic carpets, then inviting guests and rendering them all but inert by saturating their senses with the incense of communal uplift. Or, as Susan Tedeschi and a gospel choir intermittently emote during the actually lively seven-minute version of Joe Cocker’s “Space Captain,” “We’ve got to get it together, / it’s getting better and better.” Gee, I wonder whom Hancock voted for in 2008!

When The Imagine Project works, it does so by revealing why Hancock has been a jazz and funk (as opposed to a hope and change) legend for over thirty years. True, he should’ve enlisted Sade for Vinícius de Moraes and Baen Powell’s “Tempo De Amor,” but the Brazilian singer Céu does a decent enough Sade impersonation to make you overlook the oversight. And on the medley of Tinariwen’s “Tamatant Tilay” (featuring Tinariwen) and Bob Marley’s “Exodus” (featuring Los Lobos because, you know, Marley’s dead), Hancock digs deep into his bag of fusion tricks for a hot Blaxploitation-soundtrack groove even non-ganja people can imitate Soul Train dancers to.

As for the Beatles’ “Tomorrow Never Knows,” it survives being sung by Dave Matthews--if only by burying him up to his receding hairline in audio psychedelics.

Actually, in the cover of Peter Gabriel’s Kate Bush duet “Don’t Give Up,” Hancock’s dreamy side yields a dividend too. In fact, with John Legend and Pink in the Gabriel and Bush roles, it sounds almost exactly like the original, thereby rekindling hope if not exactly change (or imagination) during these dark recession-shrouded times.
Posted by The Arse Man at 10:52 AM