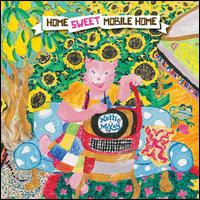 Nellie McKay: Home Sweet Mobile Home (Verve)--McKay may have intended the “rainbow” and “closet” in “Bruise on the Sky,” the organized “haters” in “Caribbean Time,” the declaration in “No Equality” that there’s no equality, and the declaration in “Please” that “I just love being me” to put to bed rumors about which sex she prefers, but because they’re too coy by half, they might just fuel the debate. One thing, however, about which there’s no argument is that no one else--male, female, straight, or LGBT--is currently writing, singing, or recording songs this rich in creative tension. The pleasures are as deep and the thoughts as heavy as the several decades’ (and continents’) worth of pop-musical eclecticism is breezy and the lyrics are effortless. Verdict: both a Jill and a mistress of all trades.

The Morlocks: The Morlocks Play Chess (popantipop)--Great title, and if anyone could make pondering an opening gambit sound like the essence of rock ’n’ roll, it’s these So. Cal. garage legends. But, seriously, the “chess” the Morlocks “play” is the greatest hits of the Chicago-based label of the same name responsible for putting Bo Diddley, Howlin’ Wolf, Chuck Berry, John Lee Hooker, and Sonny Boy Williamson on the map. And the Morlocks don’t so much play them as strip them to their roots then reassemble them after losing the directions on purpose. Imagine the Rolling Stones vs. the New York Dolls in a Battle of the Bands that ends with both acts joining forces and, instead of making nice, making really mean. Or imagine the Who’s Magic Bus driven full-speed DUI-style into a Windy City jukebox.

Cyril Neville: The Essential Cyril Neville 1994-2007 (M.C.)--Allowing for the licensing complications that precluded M.C. Records’ including anything from the Neville Brothers’ pretty good 2004 Walkin’ in the Shadow of Life, these eleven songs from the youngest Neville’s five solo albums may very well represent his “essential” recordings from 1994 to 2007, but by no means do they represent his essential recordings--he made those between 1975 (when he joined the Meters) and 1991 (the year the Neville Brothers’ Brother’s Keeper proved that 1989’s Yellow Moon was no fluke). Having gotten that straight, the salient observations are that his greatest strength (vocal intensity) is also his greatest weakness (he never really lets up), his Dylan cover (“The Times They Are A-Changin’”) drags but his Hendrix cover (“Foxy Lady”) doesn’t, and, all things considered, Perfunktory would’ve been a more accurate title.
Posted by The Arse Man at 9:06 AM