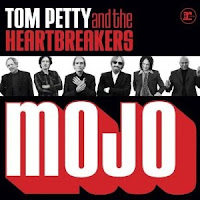 “Well poor Tom Jefferson, / he loved the little maid out back,” sings Tom Petty at the outset of his most natural-sounding album ever, “midnight creepin’ out to the servant’s shack.” That’s “servant” as in Sally Hemmings, the black slave with whom Jefferson is believed to have procreated. Jefferson, on the other hand, in case you haven’t seen a nickel lately (we’re in a recession after all), was white. As a snapshot of Mojo--as in “got my mojo working’,” as in the “blues”--the image of a white man losing himself in a rich, dark mystery would be hard to beat because, in the best parts of this album, lose himself in the blues is exactly what Petty does.

“Runnin’ Man’s Bible,” “Let Yourself Go,” “Candy,” “Takin’ My Time,” “U.S. 41,” and the afore-quoted “Jefferson Jericho Blues” are blues from their Delta structures to Scott Thurston’s mouth harp. They’re also Mojo’s musical lynchpins, making the album as a whole feel more rooted in deep feelings than the sleek, free-flowing surface of the Heartbreakers’ ace chopsmanship on the other nine songs might at first suggest.

The main motif--clinging for dear life to the one you love because you’ve passed life’s halfway point and are aging faster everyday--emerges in increments, seeping through the cracks in Petty’s pared-to-the-bone lyrics so slowly you barely notice it until maybe the half-dozenth listen. But when you do, it can knock you for a loop, especially if, like the narrator of “The Trip to Pirates Cove,” your days of partying all night with waitresses in strange towns are further behind you than you’d like to admit. What keeps the self-pity at bay is the occasional other-directedness of Petty’s empathy: Coming from a guy who watched his former bassist, the late Howie Epstein, die an addict’s slow death, the cautionary “High in the Morning” knows whereof it warns.

Only the slow-reggae “Don’t Pull Me Over” comes off superficial, sung as it is from the perspective of a paranoid mary-jane trafficker whose self-justifications (“I’ve got mouths to feed … they depend on me”) don’t really wash. Even libertarians who agree with him that pot “should be legalized” don’t believe legalization “won’t hurt anyone,” just that it’ll hurt fewer people. The schmuck--it never dawns on him that feeding his “mouths” might be so hard because they have the munchies.
Posted by The Arse Man at 8:43 AM