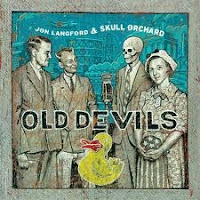 Jon Langford & Skull Orchard: Old Devils (Bloodshot)--This album is almost too subtle. Even the instantly grabbing “Getting Used to Uselessness” has lyrics so opaque that the more you listen, the less you understand. The other songs do the opposite. You have to listen past the unremarkable first impression made by the folkish melodies and slightly less-folkish instrumentation before you notice a special musical or verbal detail. Eventually, something like a theme accumulates: “I tried religion, but it wasn’t any good at all”; “They started using sex / like pills and cigarettes”; “I’d do anything to please her, / so I bought that brand-new freezer, / and I climbed inside.” Disillusionment rules? Maybe. What’s certain: For someone best known as a Mekon, a Waco Brother, and a Pine Valley Cosmonaut, Langford sure sounds a lot like Joe Strummer these days.

La Strada: New Home (Ernest Jenning)--If it’s hard to believe that an entire generation has come of age since the death of Blind Melon’s Shannon Hoon, the singer whose range and timbre La Strada’s James Craft’s most resembles, then it’s downright bizarre that three generations have come of age since the big-screen debut of La Strada, the Fellini film after which these Brooklyn musicians named their band and whose inexorably itinerant mood they sometimes capture, from its emotional complexities to its forebodingly otherworldly atmosphere. The secret: melodies that flirt but don’t bed down with mere catchiness, a soundtrack-worthy interplay of intimacy (quietly plucked guitars, Devon Press’s accordion) and grandeur (Daniel Baer’s violins, ascending background-vocal harmonies), and lyrics that don’t seem to have been written just to give the aptly named Craft something to sing.

Los Lobos: Tin Can Trust (Shout! Factory)--Nearly three decades after going national, these troupers still write humble and play proud, etching vignettes for the common man that even the uncommon man can relish. Their boycott of Arizona has earned them recent headlines, but only two of these eleven songs (“Yo Canto” and “Mujer Ingata”) are in Spanish, and in none of them, not even the impressionistic blues called “27 Spanishes,” do they pity the poor immigrant. So listeners put off by Big Statements needn’t worry, especially when the jauntiest workout has no lyrics at all (“Do the Murray”), the funkiest is a cover of an apolitical Reagan-era Grateful Dead song (“West L.A. Fadeaway”), and the serrated junkyard production makes Louie Perez’s clattery percussion and Steve Berlin’s dirty sax seem as American as the twilight’s last gleaming.
Posted by The Arse Man at 9:24 AM