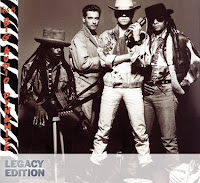 Ah, what might have been! The year was 1983, the Clash were the Most Important Band in the World, and Bernie Rhodes, the group’s Iago-like manager, had convinced Joe Strummer to expel Mick Jones--who had only composed and sung the Clash classics “Lost in the Supermarket,” “Train in Vain,” and “Should I Stay or Should I Go.” Strummer, disoriented after five psychologically claustrophobic years of non-stop writing, recording, and touring (and never the most humble of front-men to begin with), acquiesced, thus putting Jones in the position of having to form a new band and to come up with an album’s worth of material if his run as a rocker of consequence were to continue.

Big Audio Dynamite--or B.A.D., as Jones, Don Letts, Dan Donovan, Leo Williams, and Greg Roberts came to be known--was the band, and This Is Big Audio Dynamite was the album. With dub-wise production enhancing rhythm-driven songs, the music might’ve been a harbinger of future goodies coming from a rookie act. But coming from the seasoned veteran Jones they felt like a step backward (or at best sideways), suffering as much from the absence of Strummer’s political directness and urgency as the Clash’s 1985 album Cut the Crap suffered from the absence of Jones’ pop instincts.

It’s tempting to wonder whether Strummer’s snarling vocals and brash guitars could’ve given a semblance of meaning to lyrics like “Ritual ideas relativity, / only buildings, no people prophecy” (“E=MC2”) and “Newspapers sell disaster and sin, and when the dust storm comes, they say the devil rides in” (“Sudden Impact!”). It’s less tempting to wonder whether anything could’ve saved the stupid and-or petty “Sony,” in which Japan belatedly wins World War II by taking over the West one corporation at a time, and “Stone Thames,” in which Jones bemoans his bad luck over having become a groupie-magnet rock star during the age of AIDS.

As for “BAD,” it bundles Christ’s crucifixion, Reagan’s landslide election victory, and the fact that people eat at McDonald’s and KFC into a list of “things that drive [Jones and Letts] crazy” and “make [them] bad.”

But this is the twenty-fifth-anniversary Legacy Edition. Surely the seventy-minute extra disc of twelve-inch and dub versions gives forth its share of beats? Yeah, but the last word in the group’s name was “dynamite,” and only the “seven-inch non-LP B-side” title track lights a fuse.
Posted by The Arse Man at 11:28 AM