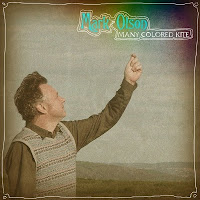 Mark Olson: Many Colored Kite (Rykodisc)--Mark Olson sings like a combination of Tom Verlaine and the Incredible String Band’s Robin Williamson. And if those allusions (both of them compliments) evoke long-forgotten memories, Olson’s adding of wind-swept strings to his acoustic starkness creates a meaningful melancholy worthy of Nick Drake and Sister Lover’s-era Alex Chilton. Elemental images abound (birds, a beehive, a snake, a dove, rivers, rain, a fountain, water that Olson’s “loved one” walks on), as do religious ones (the Tree of Life, milk and honey, being still and knowing, a song titled “Scholastica” and apparently inspired by the seventh-century saint of the same name, water that Olson’s “loved one” walks on), resulting in an irresistibly luminous mysticism somehow summed up by this proverb from “Wind and Rain”: “Empty pockets are a part of love.”

Carl Palmer: Working Live--Volume 3 (Eagle)--With all due respect to Keith Emerson’s organ stabbing, the highlight of every peak-period Emerson, Lake & Palmer concert was Carl Palmer’s drum solo (especially the seven-minute one during “Tank” circa 1977). On this latest installment of live re-workings by Palmer’s current trio of the music of ELP, there’s only one such solo (the first seven minutes of the eight-minute “In A Moroccan Market”), and its intensity isn’t quite up to the bash fests of yore. But it does earn its keep. As for the remakes of “Peter Gunn,” “Pictures at an Exhibition,” “Nutrocker,” “Bitches Crystal,” and “Romeo and Juliet,” the replacing of Greg Lake with a bassist who keeps his mouth shut (Simon Fitzpatrick) is genius. As for replacing Emerson with the electric guitarist Paul Bielatowicz. it’s, um, interesting.

Sabbath Assembly: Restored to One (:Ajna:)--Bob Marley’s popularity among non-Rastafarians is proof that, if the music is good, one needn’t identify with its religious impetus in order to enjoy it. On the other hand, if the music is as quirkily hermetic as Sabbath Assembly’s, even the group’s co-religionists might wonder whether it couldn’t make like Aquarians and let the sun shine in. For the record, the sect to which Sabbath Assembly’s five members belong is the Process Church of the Final Judgment, a Scientology offshoot that worships Christ, Lucifer, Satan, and Jehovah. Dirge-like and pseudo-mystical, none of their songs would seem out of place in a Spinal Tap set. But those guys, obviously, would play them for (and get) laughs. These guys (and gals) play (and sing) them as if laughter were the unpardonable sin.
Posted by The Arse Man at 8:50 AM