(As published in the Illinois Entertainer, May 1998)

On the cover of his new album Little Ship (Virgin/Charisma), Loudon Wainwright III sits in an inflatable lifeboat, paddling with a ukulele to get out of the way of a fast-approaching ocean liner that bears a striking resemblance to a certain big ship that's been all the rage at the movie theaters and record shops lately. 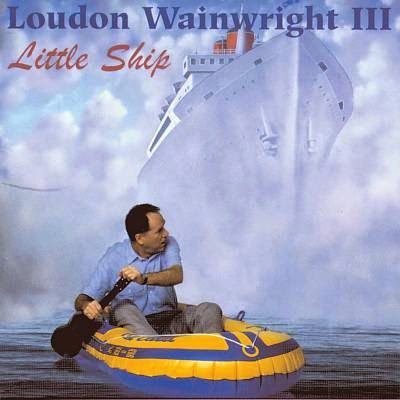 In a sense, the image captures Wainwright's commercial dilemma perfectly: For twenty-eight years now, he has watched his carefully crafted singer-songwriterly albums get overrun by "bigger" ones.  Wainwright says he had no conscious premonition of how huge Titanic was going to be when he began designing Little Ship's cover with his art director Hugh Brown (who, coincidentally, won a "Best Recording Package" Grammy for his work on Titanic: Music As Heard On The Fateful Voyage). "I must've known it subconsciously," he jokes dryly.  "I'm sure I'm going to sell a lot of CDs with that alone."
At fifty-one, the legendarily sardonic Wainwright has grown accustomed to referring to his album sales in sarcastic tones.  Despite the fact that he's released sixteen albums, almost all of them on major labels, and even had a Top 40 hit (the roadkill classic "Dead Skunk," which peaked at number sixteen on Billboard's chart in 1973), he's never had a multi-platinum album and doesn't expect a box set anytime soon.
"There's been talk of one," he admits, "but it hasn't happened.  No one's gotten in gear on it, least of all myself."  Ferreting through his several hundred songs in search of highlights, he says, "sounds like a daunting task. I 'd leave that up to somebody else.  Once I make these things, I really don't like to listen to them that much."
He does, however, like to perform them.  That's why, despite the high quality of his studio recordings, it's his live albums--1980's A Live One (Rounder), '93's Career Moves (Virgin), side two of '75's Unrequited (Columbia)--that capture his James-Taylor-on-caffeine act at its most enthusiastic.  His current tour also captures him at his most vulnerable: This time he's facing his audience armed with nothing but his guitar, banjo, and ukulele.  As one might expect, the set list tends toward flexibility.
"That can vary from night to night," he says.  "I'm certainly doing quite a few songs from Little Ship, but the other night I sang one from Grown Man ['95] and probably three from History ['92].  And the night before that I sang "Unrequited to the Nth Degree" from an album I did in 1975 [Unrequited].  I'm also playing a lot of brand new songs that aren't on any album."
He even takes requests--sometimes.  "I will if I'm in the mood, but moods are fleeting.  If somebody yells something and I think, 'That'll be fun to play,' I'll play it.  On the other hand, if somebody yells something and my little voice says, 'I don't want to do that,' then I usually listen to my little voice."  And what do people shout for the most? "People like 'The Acid Song,'" he says.  "I get a lot of requests for that."
"The Acid Song," like many of Wainwright's songs, is a comedy number.  However, unlike the tunes of singing humorists (Tom Lehrer, Mark Russell) and comedians-turned-hitmakers (Steve "King Tut" Martin, Julie "Homecoming Queen's Got a Gun" Brown), Wainwright's funny songs are as musically sharp as they are funny.
No song exemplifies Wainwright's funny side better than Grown Man's "I.W.I.W.A.L."-- better known as "I Wish I Was a Lesbian."  Chosen by Spin as the funniest song of 1996, it featured a frenetic Wainwright spouting such quatrains as "I wish I was a lesbian / I'd like to be a dyke / I could hang with k.d. lang / Mel Gibson take a hike" and "I wish I was a lesbian / That's why this song is sung / It shouldn't matter how someone is hung."
"That song probably got more play than any other song on Grown Man," he laughs.  "My object when I wrote it was to make people laugh, which I try to do from time to time.  We tried to make it funny on the record, and some people thought it was.  Other people didn't, I guess, but there's a radio station in Baltimore that played it everyday."
Little Ship also has its share of yoks.  On "Breakfast in Bed," Wainwright serves up one food-sex double entendre after another, and in "I Can't Stand Myself," he salivates over his next Miss Wrong: "There must be some kind of waitress / I could lure under my mattress ... How's about a rich heiress / Or a nice massage therapist?"
The comic numbers, though, tell only half the story.  The other half is told by the tender, ironic, sad, and funny family and broken-family songs that Wainwright has been perfecting ever since his classic odes to childbirth ("Dilated to Meet You," 1973) and breastfeeding ("Rufus Is a Tit Man," 1975).  On Little Ship, the songs "Four Mirrors," "What Are Families For?," and "Bein' a Dad" join the family-song canon.
According to Wainwright, there's no big secret to getting the emotional extremes of his music to balance.  "What I do is write a batch of songs--serious ones, comedy ones, love songs, children's songs, family songs--and I just mix and match and try to create a theme or a mood out of the thirteen or fifteen that I choose.  We cut those, and then we sequence the record so that there's a kind of an audio arc in terms of listening.  It isn't like 'Oh, this album needs a serious song--I'd better come up with something.'  We just take what we cut and shape it."
As one of a handful of singer-songwriters to have sustained a career for nearly thirty years, Wainwright is clearly doing something right.  And in another fourteen years, he can add senior-citizenship to his great storehouse of topics.
Posted by The Arse Man at 3:44 AM