(As published in the Illinois Entertainer, 2005.) 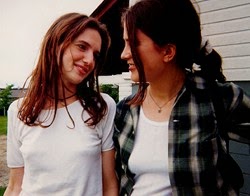 “I love the Entertainer!” exclaims Louise Post by phone from her current home in Los Angeles. “I used to read it every month. It’s such an honor to have a feature in there. I’m really psyched. You guys have always been behind us, and it’s really awesome because, you know, we’re a Midwestern band at heart, and that’s where our roots are.”

The occasion of Post’s first call in years to her formerly favorite magazine is the recent return to touring and recording of Veruca Salt. She has refused to let the band die since inheriting it in the wake of her notorious split with co-founder Nina Gordon in 1998. Although she has yet to begin work on the long-awaited and as-yet-untitled follow-up to 2000′s Resolver, she has amassed “a lot of songs,” is writing more, and hopes to have it out by next summer.

In the interim there’s Lords of Sounds and Lesser Things, the twenty-minute EP she recorded with Solomon Snyder (bass), Michael Miley (drums), and Resolver alumnus Stephen Fitzpatrick (guitars). Released on the group’s own makeshift Velveteen label, it comprises five new and thoroughly Veruca Salty songs and an answering-machine message titled “I Got My Pants On,” consisting of Filter’s Richard Patrick repeatedly screaming the title for twenty-four seconds. The disc was intended mainly to introduce fans to the new songs they’d be hearing at the group’s 2005 shows and to give them something new to buy at the merchandise tables besides T-shirts. The new songs, however, turned out so well that, according to Post, at least two of them (“Blood on My Hands” and “The Sun”) stand a good chance of being re-recorded for the long-player.

“I’ve listened to it a couple of times since I got home,” says Post, “and I was floored by how different the songs sounded from the way they ended up sounding live. We got much better on the road, and, by the end of the tour, I felt like all of the songs on the EP that we were playing had been taken to a new level.”

Fans expecting more of Resolver‘s diary-like confessions may be surprised at the less obviously autobiographical nature of Post’s latest lyrics. Not that the persona delivering those lyrics is any less of a “seether” or that the accompanying music is any less edgy than what Veruca Salt fans have come to expect. It’s just whether Post is singing, “She’s an innocent freak” (“Save You”), “I got ghosts in my bed” (“Blood on My Hands”), “You’re just not yourself/you look like someone else” (“Firefly”), or “Tell her everything can wait/’til she won’t have to medicate” (“For Days”), her targets could be anyone—herself, doppelgangers, or less famous real-life enemies than Resolver’s primary targets, Dave Grohl and Gordon.

Speaking of enemies, Post has fewer of them these days, and one reason is, before the night was over, Veruca Salt’s November 6 homecoming show at Metro had become a kind of “resolver” in its own right. “The whole evening ended up being a really touching experience,” she recalls, “just seeing people I hadn’t seen in a long time and possibly hadn’t spoken to in a long time, even people with whom I had had some bad splits and unresolved issues. I ended up making peace with some of those people that night. It was really beautiful.”

According to the reviews, the show was pretty good too, replete with generous helpings from the original band’s ’90s albums, American Thighs and Eight Arms to Hold You. Alas, whether it was the thrill of coming home (“My senses were all on overdrive”) or the caffeine rush of the triple Starbucks latte she quaffed before going onstage (“I was, like, shaking!”), Post herself barely remembers. “Usually I can think back and remember the show and kind of take stock,” she says. “But that show I can’t really remember much of. It’s sort of a blur.”

What she does remember, besides the aforementioned kissing and making up with former nemeses, is the after party. “I was so blown away by how many hardcore fans were there,” she says. “So many people were like, ‘O.K., you’re coming back again soon, right? You’re not going to wait another four years?’ It was really touching that there were so many people who wanted to let me know how much our music has meant to them.”

Post’s attitude toward her fans is genuine. It was a fan who inspired, albeit indirectly, the title of the new EP by giving Post a copy of Zora Neale Hurston’s classic novel, Their Eyes Were Watching God. “It was all sort of fated,” she says. “I was longing for a new book, and as I was looking through my bookshelves, I discovered that I had at least four copies of that book, all of which had been given to me. One of them was given to me by a fan some years ago in Chicago, and she had written this beautiful inscription inside. So it was a nice reminder to think of her. I started reading it that night, and the phrase ‘lords of sounds and lesser things’ took my breath away.”

One constant, however, has been the presence of a second female in the group’s touring configurations. “I have needed other women to tour with in order to play the backlog material and Resolver,” says Post, who since Gordon’s departure has overdubbed most of the vocals on Veruca Salt’s recordings herself. “Besides,” she adds, “there’s nothing better to me than singing in harmony with another woman.”
Of course, in keeping with the turbulence with which Veruca Salt has become synonymous, finding Ms. Right has not been entirely challenge free.

“I think the women that I’ve played with have felt like they need to fit into Nina’s shoes,” Post admits, “but that wasn’t something that I was looking for in them because I don’t feel that, beyond working with Nina, I need or desire another [equal] female partner. This band has much more become about me and my journey.”

Judging from the results of Post’s latest new musical travels, her journey should prove as rewarding to her fans as it has proven so far for her.