Lester Butler: 13 with a Bullet

Were truth serum forced down the throats of blues aficionados, many of them might confess to admiring or respecting the importance of the blues a lot more than they actually enjoy the music. And who could blame them?  The blues is, after all, the most repetitious music in the Western world, and let him who has never trumpeted music for ulterior motives cast the first rolling stone.

Lester Butler, the thirty-seven-year-old, harp-playing force of nature who first came to notoriety as the front man for the late and much-lamented Red Devils, plays a different kind of blues altogether.  In fact, he and his new band 13 don’t so much play the blues as allow it to inhabit them and throttle them within an inch of their professional viability. (“We broke mics, and it was fun,” laughs Butler in reference to the recording of 13 Featuring Lester Butler, their new Hightone album.  “But we’ll never record in that studio again because they’re totally pissed at how many mics I broke.  That wasn’t ‘respectful.’”) As a result, the thirteen songs on 13 Featuring Lester Butler—especially the homicidally maniacal “Plague of Madness”–don’t sound performed so much as possessed.
Butler, who almost played New Zealand several years ago with the Red Devils, recently talked to Real Groove about his past, his present, the number thirteen, why some of his friends occasionally look at him funny, and why Kenny Wayne Shepherd deserves to be eaten by B.B. King.
REAL GROOVE: At one point the Red Devils were booked to play in New Zealand, but you canceled at the last minute because…
LESTER BUTLER: No, we didn’t.  We never cancel.
RG: What happened?
LB: Whoever was involved in promoting it couldn’t put the money together.  It was going to be the Paladins and us.  I was stoked to go, too.
RG: The cancellation had nothing to do with the Red Devils turning into Bruce Willis’s backing band?
LB: That’s such bullshit.  I played with Willis for a long time because he’s my bud and I ran the Planet Hollywood band, but…
RG: —–
LB: Actually, I saw a movie about it.
RG: —–
LB: I’m being sarcastic.  My girlfriend’s looking at me like, “Gosh, you’re blowing it again!”
RG: The cancellation boiled down to money?
LB: Yeah, but that’s cool.  Business is business.  Somebody couldn’t come up with the dough and gave us an excuse like “Oh, you missed an interview!”  You know how the biz gets sometimes.  But I forgive them all because that’s their job: to bullshit people.
RG: One of the best things about 13 Featuring Lester Butler, by the way, is its punk-dirty sound.
LB: Oh yeah.  I read about that in a book [laughs].
RG: —–
LB: I never lived it.
RG: The album sounds more like a natural extension of Funhouse than of any blues album.  It doesn’t sound like an affectation.
LB: Thank you very much.
RG: It sounds like the next, logical step.
LB: Thank you very much.  As Howlin’ Wolf said, “Make it yaws!  And don’t play with nobody that don’t know their changes!” [laughs], which we thought was really funny considering how much one-chord shit he does.
RG: How did you get the dirty, mic-in-the-mouth sound?
LB: You know the mic they use for the room mic?  I can’t remember what it’s called, but I was singing through that, which you’re not supposed to do, and the guys at the studio were like, “Back in the booth!  What are you doing with the room mic?”
RG: Which songs did they end up letting you sing through the room mic on?
LB: “So Low Down,” “Black Hearted Woman,” “Sweet Tooth,” “Close to You”–Those were the ones that made them go, “There’s the shit! We’re sorry for not letting you sing through the room mic!”
RG: Did they really say, “We’re sorry”?
LB: Of course not.
RG: Perhaps 13 Featuring Lester Butler will become known as the blues album for people whose tolerance for the blues is limited.
LB: My tolerance for the blues is limited, too–except for James Harman.  I love him.  He’s like a father to me.  I saw him at a gig the other night, and I said, “You know, James, I’ve been coming to see you over half my life!”
RG: In what sense is your tolerance for the blues limited?
LB: I hate the homogenized copycats who are replicating Chicago blues instead of doing what Wolf and Sonny Boy did, which was to make it evolve.  And I can’t stand to see kids like–I hate to talk negative.
RG: We don’t mind.
LB: Those people who have no right to be up there singing the blues because they ain’t lived through shit–they’re little kids!  “Oh, Kenny Wayne?  Yeah, he’s a bluesman!”  Please!  I’m not trying to be egotistical, but what’s that about?  Did Albert King play that way?  “I’ll show you how many notes I can hit.”  Oh yeah.  B.B. King, Albert King, Elmore James–they were all about fancy riffs.
RG: In your liner notes, you thank Geza X, the Dead Kennedys’ producer.
LB: Oh yeah.  When Geza became involved, magic started to happen.
RG: Like what?
LB: I re-sang a lot of stuff up at his house after Jeffrey Lee Pierce died.  You know Jeffrey Lee Pierce?
RG: The Gun Club guy.
LB: Jeffrey Lee, my buddy, had just died.  I’d been listening to his music just the night before, and I said, “Let’s go there, and let’s be like a vanload of punks slamming into Howlin’ Wolf.”
RG: What vocals did you re-record?
LB: We did “HNC,” “Smoke Stack Lightning,” and “Baby, Please Don’t Go” up there.  It got more and more punk rock as the days went on. 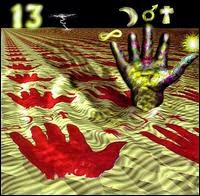