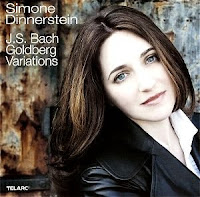 (As published in WORLD)
Since its release in 1955, Glenn Gould’s recording of Bach’s Goldberg Variations has been the standard by which all subsequent recordings of the pieces have been judged (Gould’s 1981 re-recording included). So it’s no surprise that admirers of Simone Dinnerstein’s J.S. Bach: Goldberg Variations have praised it, either explicitly or implicitly, in terms of its contrast to Gould’s.
A solitary perfectionist, Gould played the pieces briskly, dexterously chiseling the notes for maximum distinction and eliminating the repeated passages while de-emphasizing the inter-variation pauses. Dinnerstein, on the other hand, is a married mother from New York who not only retains Bach’s repeats and pauses (her recording is twice as long as Gould’s) but also plays the thirty-two brief pieces more slowly and softly. (One might even say “maternally”: she made her recording while pregnant with her son.) While her Goldberg will probably not become the new standard, it constitutes a welcome “variation” on what is gradually becoming Bach’s best-known composition.
Posted by The Arse Man at 5:36 PM