(As published in the Illinois Entertainer)
Though seventy, Leonard Cohen hardly sounds a day over fifty, the age at which he first abandoned singing for seductive whispering (on 1984’s Various Positions). Of course, one could just as easily have said that at fifty he hardly sounded a day under seventy, so dirty-old-man-like did his late-night come-ons come off even then. 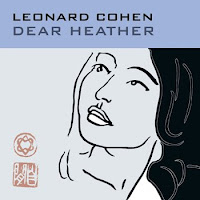 His saving grace is that, unlike most dirty old men, he possesses a gift for linguistic compression and elliptical understatement deriving from his forty-plus years as a deservingly published poet. He also possesses a gift for making his sweet nothings seem like sweet somethings by intertwining them with unexpected Elizabethan turns of phrase deriving from his immersion in the Western literary canon in general and the King James Bible in particular. What keeps him from pretentiousness is his commitment to jazz-tinged musical settings as minimalistic as his pared-down diction. To paraphrase F. Scott Fitzgerald, in the dark night of Leonard Cohen’s soul, it’s always three A.M.
Among the few but illuminating silver linings that limn his dark clouds are eccentric instrumentation and a sense of humor. On the reverentially romantic “Nightingale,” for instance, he plays that least reverent and romantic of instruments, the Jew’s harp; and on the title cut, which in terms of syllable count adds up to a mere haiku-and-a-half, he repeatedly spells out the words “white” and “winter” as if that were the only way he could think of to extend the song to its no doubt mystically significant length of three minutes and forty-three seconds.
Posted by The Arse Man at 5:20 PM