My Dinner with Jimi: Turtle Soup!


The line between an obscure flop and a cult favorite may be thin, but it’s real, and few films have walked it as patiently as My Dinner with Jimi (Micro Werks/Rhino).

A hit on the independent festival circuit in 2003, the ninety-minute film had a limited theatrical run in 2007. Now, with its release on DVD, it may finally become for fans of the Turtles--the pop group whose story it tells--what Head has long been to fans of the Monkees: a kaleidoscope through which to catch glimpses of that most dizzyingly centrifugal of decades, the ’60s.

Directed by Bill Fishman, My Dinner with Jimi is really two films in one. The first recreates the months in 1967 when the Turtles were transformed by their chart-topping hit “Happy Together” 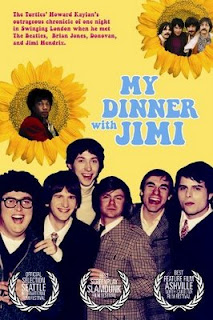 from Los Angeles favorites to international stars. It lasts an hour but feels shorter due to the fast pacing necessary to include multiple key episodes such as the Turtles’ appearing on The Smothers Brothers Comedy Hour, their late-night hobnobbing with rock royalty in L.A. (Jim Morrison, Cass Elliot, Frank Zappa) and London (Brian Jones, Graham Nash, the Beatles), and the tragi-comic draft dodging of the band’s frontmen Howard Kaylan and Mark Volman.

The second film-within-the-film inspired the title and provides the climax. It dramatizes a four-A.M. dinner that Kaylan had with a then little-known Jimi Hendrix at London’s Speakeasy club in 1968. It lasts only fifteen minutes but feels longer because it focuses on the uninterrupted eating, drinking, smoking, and talking of two characters.

Hendrix, whose career would soon sky rocket with his appearance at the Monterey Pop Festival, wants to know how it feels to have a number-one record. Kaylan, driven to introspection by the drugs and alcohol he has been consuming all night, confesses that neither fortune nor fame has brought him any nearer to discovering “inner truth” than he ever was. Hendrix urges him to enjoy the ride for all it’s worth; after all, it’s the “Summer of Love.” But for Kaylan, the “Bummer of Love” is more like it.

There are, of course, problems unique to films that depict historical events populated with famous people. Although the credits make clear from the outset that Kaylan himself wrote the script, viewers made skeptical by one too many over-fictionalized biopics may still find their enjoyment hampered by a preoccupation with the film’s verisimilitude or lack thereof.

Such skeptics should select the “extras” option from the DVD’s main menu and watch the film with its commentary-track enabled first. In it Kaylan and producer Harold Bronson spontaneously, and very entertainingly, establish that many of the events took place exactly as depicted and share relevant behind-the-scenes anecdotes.

The other problem is casting actors who look enough like the people they portray to enable suspension of disbelief. On this score My Dinner with Jimi succeeds surprisingly well. Royale Watkins as Hendrix, Jason Boggs as Volman, and Brian Groh as John Lennon are so convincing in both appearance and manner that the few who fall even a little bit short (Quinton Flynn is more Eric Idle than Paul McCartney) are conspicuous by comparison.

There is one interesting Turtles footnote that goes unmentioned in Bronson’s and Kaylan’s commentary: Volman, who with Kaylan still performs as the Turtles, became a Christian in the 1990s and is now an associate professor at Nashville’s Belmont University and, with his wife, a youth-group leader at his church.

Knowing what he has become significantly enhances the scene in which he meets musicians once considered “bigger than Jesus.”
......................