(As published in B-Side)

When people think of Morphine--the disque noir rock trio best known for bringing the jazzy ambience of the Beat Era into the '90s--they usually think of Mark Sandman, the band's freely associating frontman and master of the two-string bass. But the full-bodied sax of Dana Colley plays an equally important role in the Morphine sound. Like Mark Sandman's singing, it's an eloquent voice in the trio's unique, three-way conversation. "Well," chuckles Colley, "I've always said that one of my biggest influences is Mark Sandman."

On Yes, Morphine's second and latest album for Rykodisc, the sax, bass, and voice interact with Billy Conway's articulate drumming to create an atmosphere of intrigue that's largely disappeared from the alternative landscape thanks to the Lollapalooza generation's obsession with obviousness. It's a mood that the trio doesn't arrive at by accident. "My role is to play back and forth between rhythm and harmonies," Colley explains, "between Billy's drums and Mark's bass and among the different chordal effects we get using Mark's voice and bass, with the sax taking on a third. You can go from a third to a rhythmic element at any point in any song. So there's a lot to work with."
As a result, different degrees of Morphine's muted intensity emerge throughout both Yes and its predecessor, Cure for Pain, from the subterranean hush of a spoken-word piece like “The Jury” ("The defendant will be remanded to the bailiff and fresh mint in sparkling water...") to the rumba-billy shimmy of Yes's first single, “Honey White.” 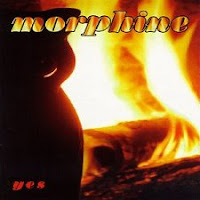 But all of it writhes with an after-hours sensuousness that boils to the surface most suggestively in “Super Sex.” "We figured 'Super Sex' would go over well in Europe," says Colley, recalling the band's decision to release it as a single overseas. "It's a little more dance oriented, and there's a big dance scene there. But when it came to deciding the U.S. single, we saw the potential of 'Honey White' immediately. It's a cut-to-the-chase kind of song that will stand up to radio play."
Colley began his development into one of rock's most visible saxmen at the age of "about seven" when the opportunity to join a school band presented itself. "My next-door neighbor was playing clarinet, and I thought that would be a cool instrument. But I found that there wasn't a lot of clarinet music I was interested in. It just didn't have the balls, the passion, or the soul that a saxophone did. So I made the transition.
“Then, when I was in high school, I got into jazz. But because I grew up in the '70s, I listened to a lot of guitar players and wanted to be more of a guitar player than a saxophone player. So I tried to find a way to do what guitar players were doing, but on the horn."
To this end, Colley eventually came up with ways to coax more than the usual number of rock 'n' roll sax textures out of his instrument. He also developed the crowd-pleasing trick of playing two saxophones at one time, an approach he even uses occasionally in the studio because he likes the sound. But as a lover of serious jazz, he's also careful not to exploit his role in the band for its gimmick value.
"Coltrane is my favorite saxophonist of all time," he confesses. "And I love Eric Dolphy and Ben Webster, too. I also love Steve Berlin of Los Lobos. He's been a great inspiration. But Coltrane, I think, took what Charlie Parker did and made it accessible. And Charlie Parker, you know, was the greatest."
Near the end of Clint Eastwood's 1988 Parker biopic Bird, a scene transpires that shows a seriously ill and no-longer-popular Parker confronting a significantly less-talented rival who nevertheless packs rock 'n' roll venues with screaming fans. It's a scene that illustrates the tension between experimentation and crowd pleasing, a scene that, according to Colley, "speaks volumes for any jazz player, or rock player, for that matter."
"There was no one who could play like Charlie Parker. But it wasn't understood. I mean, people also need to be able to empathize and feel that they could be the ones up there playing. I think that the greatest success of many rock bands is that they really can't play, yet they do it somehow. It's important to make what you do accessible."
Nevertheless, Colley hopes that Morphine remains a vehicle for the testing of musical boundaries. "‘The Jury' is definitely a little outside. And on 'Sharks' there's a level of distortion, a level of dissonance, that's more successful at conveying emotion than any 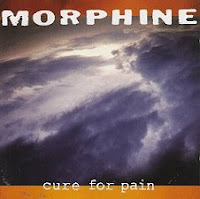 series of scales you could play. We're definitely trying to bridge the gap between melody and dissonance and bring them both into play.
"I've often felt that the saxophone has been underutilized, and I certainly try to give it a different approach in terms of its position in rock music. But ultimately Billy and I are role players who attempt to hold up Mark's lyrics with the best possible foundation.
“After all," he adds modestly, "in order for a band to be successful, it has to go with its strengths. And Mark's songwriting is definitely the primary strength in this group."
....................
Mark Sandman passed away in 1999 at the age of forty-six.
Posted by The Arse Man at 3:43 PM