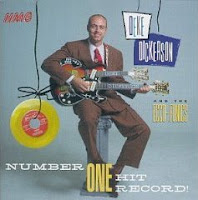 With Jimmy Page tours down to few and far between, a rock-and-roll fan’s best chance of seeing an honest-to-gosh doubleneck guitar played live and on-stage may lie with Deke Dickerson, the Los Angeles-based roots-rock revivalist who along with his group the Ecco-fonics opens for the Reverend Horton Heat at the Varsity Theatre in Baton Rouge this Friday. But arrive on time. "The double-neck is so heavy, I can really only play it for seven or eight songs," Dickerson admits. "Then
I have to put it down."
Dickerson, thirty-two, assembled the Ecco-fonics in 1997, one year after playing his last gig with Dave Stuckey in the imaginatively named "hillbilly duo" Dave and Deke. In ’98 he released Number One Hit Record! (HMG), followed by More Million $eller$ (Hightone) in ’99. Mixing clever novelty covers with even cleverer 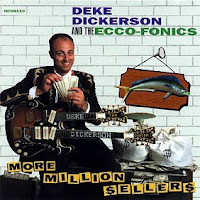 nostalgic originals, the albums established Dickerson as an ace purveyor of sock-hop thrills in a hip-hop era--a singer who could evoke Jerry Lee Lewis one minute, Roy Orbison the next, and Ricky Nelson or the Everly Brothers the minute after that. The albums also established Dickerson as the rockabilly guitarist’s rockabilly guitarist. No one-lick pony, he picked his masterly way through jazzy Western swing, rebel-rouser rock, raw-hide rumble, and stray-cat strut.
Rhythm, Rhyme and Truth (HMG), his latest album, came out last fall. Although it too lets the good times roll, it also reveals on songs such as "Where Am I Goin’?" and "Have Blues Will Travel" a sadder, more reflective Dickerson than usual. "Within a very short time my life turned completely upside down," he writes in the notes. "My folks got divorced ..., I got divorced myself, and I came down with diabetes.... Everything used to make sense before, but it’s all gone now."
"I wrote those things to help people get an idea of where my head was at," he says. "I had some pretty dark moments, and I think it’s important for people to know that. But I almost wish I hadn’t now because at every show somebody comes up to me and asks, ‘Are you feeling O.K.?’ The last thing I wanted was to get pity out of people."
Well, maybe not the last thing. In addition to the aforementioned somber tunes, Dickerson’s new album also contains "Where to Aim," a stark, arresting original in which, to the haunting doo-wop harmonies of the Calvanes, Dickerson wonders, loaded pistol in hand, whether ’tis nobler in the mind to suffer the slings and arrows of outrageous fortune, or to take arms against a sea of troubles and, by opposing, end them. Had Dickerson not mentioned divorce and diabetes, one might conclude from "Where to Aim" that he’d recently caught a double-feature of Sydney Pollack’s They Shoot Horses, Don’t They? and Ingmar Bergman’s Sawdust and Tinsel. "To be perfectly honest, I’d never really thought that much about suicide," he says, "but you get in that frame of mind where you’re just, like, so low down that, you know, you start writing songs like that."
These days Dickerson would just as soon focus on the album’s lighter songs, to wit, "Hot Rodder’s Lament" (which goes "They say I own my car, but it’s the other way around"), "Don’t Push Me Too Far" (which goes "When you crawled into bed about six A.M., I could tell that you’d been out with him"), "Wang Dang Dula" (which goes "Wang dang dula!"), and "Give Me a Brunette," a song that joins Number One Hit Record’s "Peroxide Blonde" and More Million $eller$’ "Red Headed Woman" in celebrating coifs of a different color. "There’s an old Treniers song called ‘Bald Head,’" he muses. "It’s about going out with a girl, and her wig falls off. That might be a good one to cover for the next album."
Rhythm, Rhyme and Truth represents another break from Dickerson tradition too: almost no celebrity cameos. On album number one, Claude Trenier and the former Collins Kid (and fellow doubleneck guitarist) Larry Collins dropped by, while album number two included guest shots from the late Billy Barty, the former X guitarist Billy Zoom, Hadda Brooks, and Jerry Scoggins, the voice of the Beverly Hillbillies theme song. By comparison, the main guest performers on Rhythm, Rhyme and Truth--the Calvanes--are obscure, known mostly to doo-wop collectors and other specialists in pop-music arcana.
There’s nothing obscure, however, about their contributions to "Hot Rodder’s Lament," "Wang Dang Dula," or "Where to Aim." Sounding every bit like R&B Jordanaires, they allow Dickerson to sound like an alumnus of Sun Records. "I was playing them really early Willie Nelson and Patsy Cline to get them oriented to what I wanted on ‘Where to Aim,’ and they said, ‘Aw, man, we used to watch Hee Haw every week on TV! We love this shit!’"
Dickerson laughs. "They just fell right in."
Posted by The Arse Man at 7:54 PM