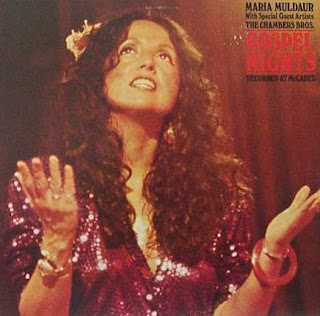 Maria Muldaur's excellent live album Gospel Nights (Takoma 1980) has been out of print for years. (It was briefly available on CD piggybacked with John Fahey's Yes, Jesus Loves Me! minus one track to make them both fit.) The band included the Alpha Banders David Mansfield and Steven Soles and the now-departed Steve Bruton, and there were special-guest cameos by the Chambers Brothers and the Burns Sisters. The liner notes, written by T Bone Burnett (who would go on to produce Muldaur's 1982 album There Is a Love, as well as albums by Los Lobos, Elvis Costello, and Sam Phillips, and the O Brother, Where Art Thou? soundtrack), were nothing to sneeze at either (unless, of course, one was allergic to beautiful writing). Neither were they reprinted on the aforementioned Fahey twofer CD. I hereby reproduce them in their entirety and in their original format, with the following exception: I have been informed by someone who should know that the "van Gogh" in line six was supposed to be "van Goyen." So "van Goyen" it now is....


I was asked, "Do you think Christianity is a fad?"
"A fad," I wondered.
And I thought about C.S. Lewis and G.K. Chesterton
And T.S. Eliot.
And I thought about Tolstoy and Dostoyevsky.
And Rubens and van Goyen and Rembrandt.
And Handel and Hayden and Bach.
And Luther.
And Pascal.
And Dante Alighieri.
And a Kempis and Augustine.
And Saul of Tarsus and Simon Peter.
"It's been going on for years," I thought,
"Back to about one."

This is a record of two nights of music
Recorded live in the back room of
A guitar shop, McCabe's, from
Next door in Takoma's studio.
It wasn't planned. It grew there.
The Chamber Brothers were called
And the Burns Sisters
And Steven Soles and Stephen Bruton and David Mansfield.
And Danny Timms and Ron Tutt and Leon Gaer.
They got together and remembered songs
And made music
Drawn from a rich heritage.
One of Celebration.
Of Joy.
Of Freedom and Release.
And Generosity.

This is a singer in touch with the source
Of Rhythm & Blues and Country & Western and Rock & Roll.
Of Otis Redding and Hank Williams and Elvis Presley.
Al Green and the Stanley Brothers

Not that she thinks she is any of those people.
She looks in their direction
And a breath of fresh air
Blows in through a window
Painted open.

In a world in which people put their lives in boxes
--Spirit and Beast and Leisure and Work and Faith and Reason--
That never touch,
This is music that is connected.

In a world whose memory
Goes back to about 1963,
A world cut off from the past,
It is important to discover our history.
Because we are all leaves on a tree.