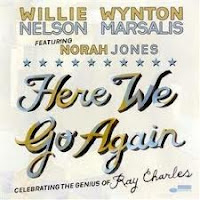 WILLIE NELSON & WYNTON MARSALIS FEATURING NORAH JONES
Here We Go Again: Celebrating the Genius of Ray Charles
(Blue Note)
Classy but in touch with their roots, Wynton Marsalis and his jazz quintet are the ideal musicians to recreate the vibe of a vintage Ray Charles gig. And NYC’s Lincoln Center for the Performing Arts, where this album was recorded, is exactly the kind of place Charles would be playing today were he alive. But it would be hard to find singers less worthy of “celebrating” his impassioned soul-gospel vocal style than Willie Nelson and Norah Jones. At least Nelson is comfortable with the material. Jones, on the other hand, except maybe on “Makin’ Whoopee,” is doing well even to sound fully awake. Thank heaven then for Marsalis, who, singer though he isn’t, keeps the evening interesting with vocal turns on “Hit the Road Jack,” “Busted,” and “What’d I Say.” 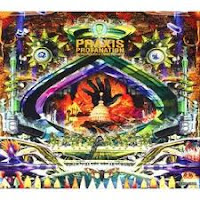 PRAXIS
Profanation: Preparation for a Coming Darkness
(M.O.D. Technologies)
One good thing about avant-garde noise is that it never really sounds dated, which is especially fortunate for this apocalyptically roiling space-metal funk album by Bill Laswell (bass), Buckethead (guitar), and Brain (drums). First set to come out in 2005, it wasn’t released until 2008 and then only in Japan. Has it been worth the wait? Fans of Iggy Pop, Serj Tankian, and Mike Patton, each of whom makes a cameo, will probably think so. But it’s the recently deceased Rammellzee who steals the show. “I was reading the Bible backwards and upside down as usual,” he deadpans in “Revelations Part 2.” “And I came across a passage that said, ‘Loop-loop-de-loo.’” The music sounds upside down and backwards too--that is, when it doesn’t sound backwards and upside down. 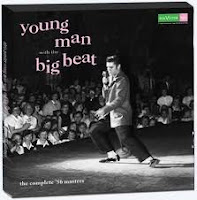 
One probably shouldn’t encourage this kind of thing.  If this box does well, you just know that Sony will release one dedicated to every year of Elvis’s corporeal career, right up to Fat Man with the Big Sideburns: The Complete ’77 Elvis Presley Masters.  But if you’ve got $100 to spare, you really could do worse than to splurge on this five-disc set.  Yes, the alternate takes and live cuts on Discs Three and Four are as comically superfluous as the interviews on Disc Five are heartbreaking: The world was his oyster, only he didn’t know that clams sometimes slam shut.  But if the nearly two studio hours of Discs One and Two were all that Elvis recorded, his status as rock-and-roll’s greatest singer would still be secure.


My Illinois Entertainer Reviews: Q
Posted by The Arse Man at 2:21 AM