Carrion Crawler/The Dream
(In The Red) 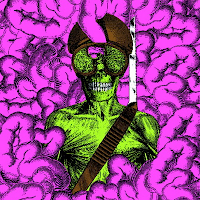 Thee Oh Sees don’t rock.  They careen.  And on this double-titled single disc, they careen harder than they do on their other 2011 releases (Castlemania, Singles Vol. 1 + 2).  By Track Two--the double-titled single song “Contraption/Soul Desert”--the San Francisco foursome is barreling full throttle down a boulevard of broken flashbacks in a psychobilly hot rod fueled by dirty water, and the other songs recreate the sensation.  From amid the din, John Dwyer and his sidekick Brigid Dawson sing in unison, but it’s hard to make out what because, as at their shows, the drums, guitar, bass, and keyboard are mixed as high as the vocals.  Some have categorized the band as “garage rock,” but in garages cars stand still.  “Yerba Buena Tunnel rock,” anyone? 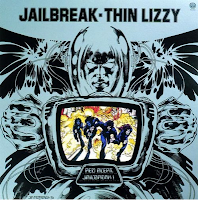 THIN LIZZY
Jailbreak (Deluxe Edition)
Johnny the Fox (Deluxe Edition)
(Universal)
In 1976, with Bruce Springsteen in litigation limbo and Jimi Hendrix in Rock-and-Roll Heaven, Thin Lizzy’s Phil Lynott came off like a reasonable-enough facsimile of the two to be worth settling for, especially if by “settling” one meant relishing a hard-rock apotheosis like “The Boys Are Back in Town” a dozen times a day on the radio. The result? Jailbreak, Lizzy’s sixth album, went gold, and the follow-up, Johnny the Fox–well, didn’t. Yep, it was over that fast, at least in the U.S. Maybe Lynott was just too bloody Irish (“Fools Gold” even cites the Great Potato Famine). Or maybe because, as these rarities-enhanced reissues inadvertently prove, “The Boys Are Back in Town” was as good as Lizzy got, and fans quickly spread the word around.
2011 Illinois Entertainer reviews, W-Z
Posted by The Arse Man at 7:59 PM