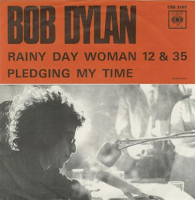 1. “Rainy Day Women #12 & 35” (1966).  “[S]ome people,” observed Rolling Stone’s Mikael Gilmore to Dylan in 2012, “still see ‘Rainy Day Women’ as coded about getting high.”  “It doesn’t surprise me that some people would see it that way,” replied Dylan. “But these are people that aren’t familiar with the Book of Acts.”  Heck, these are even people that aren’t familiar with what “stoned” meant to non Bible readers circa 1966.  According to Dave Marsh in The Heart of Rock and Soul: The 1001 Greatest Singles Ever Made, Ray Charles’ 1966 recording of the Ashford-and-Simpson composed “Let’s Go Get Stoned” was about the “pleasures of getting wasted”--but not via marijuana or any other then-illegal drug.  It was, rather, a musical “plea to go out for a drink.”  So “stoned,” like “tight” a decade or so earlier (but not in the “Tight Connection to My Heart” mid-’80s), probably just meant “drunk,” which is certainly how everyone in the studio sounded when Nashville tapes captured this raucous waltz.  But back to the Acts of the Apostles (which, lest anyone forget, was originally Part Two of the Gospel According to St. Luke).  In Chapter Seven, verses fifty-four to sixty, Stephen becomes the first Christian martyr.  “And they stoned Stephen,” writes Luke, “calling upon God, and saying, ‘Lord Jesus, receive my spirit.’  And he kneeled down, and cried with a loud voice, ‘Lord, lay not this sin to their charge.’  And when he had said this, he fell asleep.”  Dylan, by his own admission (cf. Don’t Look Back), wasn’t much of a Bible reader himself in those days, so it’s unlikely that Stephen was on his mind when he wrote this song.  But he did know a thing or two about being “stoned,” having weathered by that point the ire of folk-music Pharisees for his having gone electric.  Thirteen years later, he’d suffer a similar backlash for recording and performing nothing but songs in praise of the God-Man whom Stephen was stoned for preaching about--a fact that, along with his well-documented fondness for alcohol, no doubt explains why this song continues to pop up in Dylan’s set lists.  As for its spirit’s (if not its letter’s) having inspired the Meters’ “They All Ask’d for You” (in which men give names to all the animals in New Orleans’ Audubon Zoo), well, Cyril Neville, that song’s lead singer, did show up as a percussionist on Oh Mercy, didn’t he? 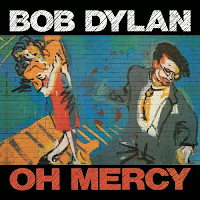 2. “Ring Them Bells” (1989).  Speaking of Oh Mercy, this simple piano-and-eerie-organ hymn distills that album’s ghost-whispering-into-the-night gestalt at least as potently as “What Good Am I” (the acknowledged tour-de-force of his current Duke Robillard tour).  Addressed to “ye heathen” (like Infidels?) and alluding to the “bride” (the term for the Church in Dylan’s favorite biblical book, Revelation) for the first time since “The Groom’s Still Waiting at the Altar” eight years earlier, the song urges quasimodos everywhere to get over the hump and sound the alarm.  “Sacred cow[s],” widows, orphans, lilies arrayed finer than Solomon, “sweet Martha” (who, unlike her sister Mary, “was worried and upset about many things” [Luke 10]), sheep in need of a Shepherd, the “chosen few,” a God who is one--biblical archetypes abound.  But just who is St. Catherine?  It depends.  There are at least six by that name in the Catholic Church alone.  My guess is St. Catherine of Alexandria, about whom the Catholic Encyclopedia says, “far from forsaking her Faith, effected so many conversions, [and] was condemned to die on the wheel, but, at her touch, this instrument of torture was miraculously destroyed.”  I mean, if this wheel was destroyed because it was on fire.... 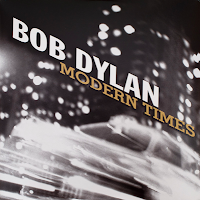 3. “Rollin’ and Tumblin’” (2006).  The great rock-and-roll guitarist Bill Kirchen, who was actually in the audience at the Newport Festival when Dylan plugged in with Mike Bloomfield (and who went to high school in Michigan with Iggy Pop, but that’s another story), once told me that, while he revered Dylan’s first ten albums, he was no fan of this Modern Times song as it merely and lazily recycled the Muddy Waters’ song of the same name.  Well, recycle Muddy Waters Dylan unquestionably does but not without tossing in some piquant additives of his own: “Ain’t nothing so depressing as trying to satisfy this woman of mine” (ring them bells, ye divorced); “[t]his woman so crazy, I ain’t gonna touch another one for years” (yeah, good luck with that, ye heterosexual males); “[s]ome young lazy slut has charmed away my brains” (that’s more like it)--each sung in an experience-ravaged voice that does not by any means absolve the singer from having been one of the two that it took to tango.  And beneath it all rumbles a fast train coming. 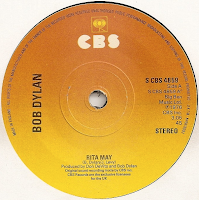 4. “Rita May” (1975).  It was the B-side of a live Hard Rain single although it was recorded a year before during the Desire sessions.  It was included on the Masterpieces collection although a masterpiece is one of the many things that it’s not.  It may have been addressed to the author of Rubyfruit Jungle, a lesbian roman à clef that I would like to think Dylan, if he read it at all, preferred to whatever he read by Erica Jong.  It was covered by Jerry Lee Lewis (because it’s rockabilly-ish and because Lewis is randy).  In 2025, when Dylan is eighty-four, it will be included on Sony’s Desire 50th anniversary box.  You read it here first. 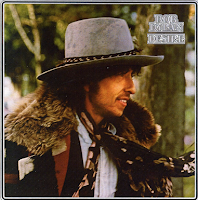 5. “Romance in Durango.”  “Me and Magdalena on the run”--nah, Dylan didn’t identify with Christ much, did he?  “No Ilores, mi querida, / Dios nos vigila”--nah, Spanish isn’t the loving tongue, is it?  “Then the padre will recite the prayers of old / in the little church this side of town”--how much you wanna bet that that church is ringing them bells?  “Soon the face of God will appear”--Dylan had no idea how soon (cf. Slow Train Coming, 1979).  The live Rolling Thunder Review versions, in which Dylan cracks the whip on all the tired horses dragging the rendition on Desire, gallop apace.  And If ZZ Top hadn’t already had folks “dancing the Fandango” before Dylan and Jacques Levy crafted these weird words, this song could even be more “Dylan is a prophet” material.