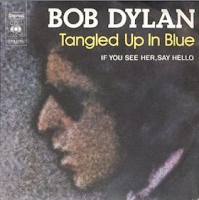 1. “Tangled Up in Blue” (1975).  Dig (as “Lenny Bruce” might’ve said): In 1985 I drove “out west” with a red-haired woman (let’s call her Miss X) who was “married, soon to be divorced.”  A U-haul trailer full of her stuff was killing my car’s transmission alive, but otherwise I did not use “a little too much force.”  Sometimes I wish I had.  I definitely sometimes wonder whether “her hair is still red.”  During our road trip, we stopped in at the Milltown Union Bar made famous by Richard Hugo in the poem of the same name.  We bribed a motel maid in Wyoming to let us overstay our checkout to watch John Cassavetes‘ Love Steams, which just happened to be playing on HBO.  We spent a night in the Badlands made famous by Terrence Malick (and Charlie Sheen and Sissy Spacek) and Bruce Springsteen.  Once during my two-year stint in Seattle, she was my date for a solo Roger McGuinn show at the Backstage in Ballard, WA, and therefore shared with me the pleasure of hearing Byrds-lite performances of “My Back Pages,” “Mr. Tambourine Man,” and (approximately ten years after its nightly roll in the Rolling Thunder Review) “Chestnut Mare.”  I got McGuinn’s autograph.  As far as I know, she did not ever work in a “topless joint,” and, to this day, I know nothing about her parents‘ attitude toward homemade dresses or bank accounts.  A few years later, I drifted down not to New Orleans but to Opelousas, which is just three hours north of it (i.e., close enough for jazz) and eventually saw lots of shows (three of them Dylan’s) in the Big Easy, Baton Rouge, Lafayette, and Thibodeaux.  I never worked on a fishing boat, but I endured four or five “Hurricane”s (Katrina included).  I don’t know any Montague Streets, but for sure something inside of me has died, and I own a vinyl copy of Eddie Kendricks’ “Keep On Keepin’ On.”  None of my friends are mathematicians or carpenters’ or truck drivers’ wives--at least I hope not.  But it’s not dark yet, so, you know, there’s still time.  Do I ever wonder what’s going on with Miss X (besides hair-color changing, I mean) these days?  Sometimes.  In short, this song is the story of my so-called life.  I’d have it over “Brownsville Girl” any day. 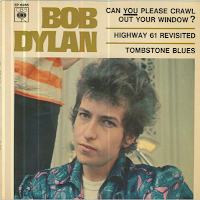 2. “Tombstone Blues” (1965).  The “Papa’s in the alley, looking for the fuse” lyrics on Real Live are better than the Highway 61 Revisited originals that have papa “looking for food,” not only because fuse rhymes more precisely with blues but also because the ghost of electricity can howl in the bones of your face whereas you can’t live by bread alone because you won’t be satisfied.  Otherwise, either version will do.  “Stop all this weeping, / and swallow your pride.  You won’t / die.  It’s not poison”--besides prescribing the antidote to the disease of conceit--is haiku.  And although “Ma Rainey and Beethoven” is more interesting misheard as “My Iranian Beethoven,” the singer’s desire to “write a melody so plain” that it could function as an easing, cooling, analgesic that helps folks unlearn what they didn’t want to learn in the first place explains in part why he once told an interviewer he hopes he "never" paints his masterpiece. 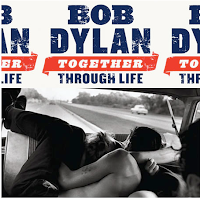 3. “This Dream of You” (2009).  First, listen to 1979’s “I Believe in You.”  “Don’t let me drift too far,” sings the newly reborn Dylan, touchingly illuminating the fear of apostasizing that haunts even the most obvious believers.  Skip ahead thirty years.  Dylan has drifted too far--from shore, from sure, you name it.  (A busted second shotgun marriage, a pile of second-or-third-rate albums, discovering the shallowness of American Evangelicalism, and a heart ailment resulting from inhaling too much chicken merde down on the farm will do that do a Voice of a Generation.)  But the dream--i.e., the memory--of that magic once-upon-a-time moment when the presence in a “cheerless room in a curtained gloom” couldn’t have been anybody else but Jesus persists and keeps Dylan hanging on like a Vanilla Fudge Supreme.  “There's a moment when all old things / Become new again,” sings the sixty-eight-year-old, now much craggier-voiced troubadour, paraphrasing the non-Minnesota Saint Paul in Second Corinthians 5:17.  “But that moment might have come and gone.”  He goes on to paraphrase Second Timothy 4:7  (“I’ll run this race until my earthly death”).  He’d admitted that he was a “little too blind to see” circa “Precious Angel,” but now by asking “Am I too blind to see?  Is my heart playing tricks on me?,” he’s questioning not only his own vision but that heart of his as well. He doesn’t want to believe, but he keeps believing.  He’s not so much hanging on to a solid rock as discovering that somehow the solid rock is hanging onto him.  No wonder come Tempest he was swearing to uphold the laws of God--and insisting that the blood with which he was paying was not his own. 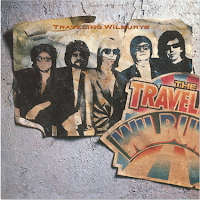 4. “Tweeter and the Monkey Man” (1988).  It’s been common knowledge for so long that this song is a Springsteen spoof that people coming to it for the first time nowadays probably don’t find it all that funny.  But when The Traveling Wilburys Volume One was new, the audacity of the Old Dylan’s making unfiltered fun of the most famous New Dylan ever was unexpected enough to be flat-out hilarious.  That the Old Dylan’s fellow grizzled vets went gleefully along for the ride (and included a Beatle, an Electric Light Orchestrator, a charter member of the Only the Lonely Hearts Club Band, and that grizzled-vet-to-be Tom Petty) gave the sarcasm added cachet, as did the way the humor echoed the many punch lines of the similarly goofy trees with roots that the Old Dylan had once planted in the Band's basement.  The main difference?  He'd been so much older then; he was younger than that now.  And by christening this song's protagonist “Tweeter,” he obviously foresaw the Twitter world in a grain of sand.  (Follow me at https://twitter.com/ArsenioOrteza). 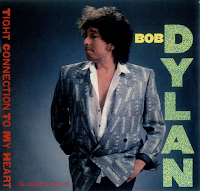 5. “Tight Connection to My Heart (Has Anybody Seen My Love?)” (1985).  This song was a bona fide single (peaking at 103 on Billboard), with an MTV video featuring Dylan turning Japanese and everything.  And it’s rich, drawing upon everything from Puccini (“Madame Butterfly, she lulled me to sleep”), Gene Pitney (“in a town without pity where the water runs deep”), and Humphrey Bogart (“Well I had to move fast, / and I couldn’t with you around my neck") to Foreigner (“there’s a hot-blooded singer”), Hoagy Carmichael (“singin’ ‘Memphis in June’”), and overtly palace-of-the-Pope language (“Never could learn to drink that blood and call it wine”) that wouldn’t rear its head in Dylan’s lyrics again until the reference to the “mother of our Lord” in 2012’s “Duquesne Whistle.”  Atop a Sly Dunbar and Robbie “In the Alley” Shakespeare’s reggae-groove-with-benefits excavated from an Infidels outtake, Arthur Baker applies just enough techno-sheen to accentuate this song's many positives.  So why doesn’t "Tight Connection" appear on any of Dylan’s post-1985 compilations?  And why mightn't the Gary Cooper paraphrase that goes “What looks large from a distance /close up ain’t never that big” be a reference to the Dylan body part that itches in the third verse of “Don’t Fall Apart on Me Tonight”?