(As published in the Times of Acadiana ... )

As recent international events have shown, goodwill between English-speaking and French-speaking countries is fragile. It will take something bigger than war with Iraq, however, to sour the affection that the Iguanas, New Orleans’ premiere all-purpose musical combo, feel for Belgium.

“We had a minor hit there a few years ago,” says Rod Hodges, the Iguanas’ guitarist, main lyricist, and frequent lead singer.

It’s an overcast spring afternoon, and Hodges and Joe Cabral, the other lead-singing Iguana and Hodges’ main songwriting partner, are holding forth at the Fair Grinds Coffeehouse in New Orleans, mere blocks from where they’ll take the stage later this month for their annual performance at the Jazz and Heritage Festival. The “minor” Belgian hit to which Hodges refers is “Oye Isabel,” a lilting and instantly likeable “La Bamba”-like tune from the group’s 1994 album Nuevo Boogaloo (MCA). “We toured over there behind that song,” he recalls. “We went to Belgium, Norway, and Sweden. We haven’t back since then, though, and that was ’94 or something.”

It’s not surprising that “Oye Isabel” became a hit. What is surprising is that the Iguanas don’t tour abroad more often. With their occasionally Spanish lyrics and a collective musical imagination irrigated by tributaries as diverse as they are numerous, they play “world music” at its least off-puttingly overexotic, nonchalantly negotiating numerous cultural and stylistic twists and turns within an easily identifiable roots framework.

Not that the Iguanas--Hodges, Cabral, Derek Huston (tenor sax), Rene Coman (bass), Doug Garrison (drums)--lack for work. They tour the contiguous United States steadily, going over big in Chicago, New York, San Francisco, and--no surprise considering their fully functional bilingualism--Houston and Austin. “We just got back from a really great tour in New Mexico,” says Hodges. “Albuquerque, Taos, Santa Fe, and a lot of Chicanos did come out.”

In addition to such Iguanas staples as “Para Donde Vas” (most recently revived on the Phenomenon soundtrack), and “Boom Boom Boom,” the New Mexican clubgoers were also treated to selections from Plastic Silver 9 Volt Heart, the Iguanas’ just-released Yep Roc Records 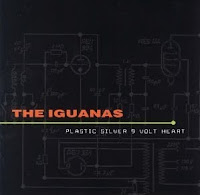 debut and their first album of new material in four years. Eclectic even by Iguanas’ standards, Plastic puts to rest any fears that the band might be settling into a rut. While longtime fans might consider the album relatively light in the piñata-busting party-tune department, there’s no denying the new stylistic and emotional depth and breadth of songs such as the title cut (narrative nostalgia writ sweet) and “The Liquor Dance” (frivolous frat-boy raunch).

“That was just me walking down the railroad tracks, trying to write a Bob Dylan song,” says Hodges of the latter. “You know how Dylan does that rhyming thing where he just rhymes and rhymes? That’s what I thought about when that song started going on in my head.”

“I didn’t know that,” laughs Cabral, implicitly admitting that, despite the long-running and intimate nature of his collaboration with Hodges, secrets remain.

“Sometimes I’ll have almost all the lyrics,” says Hodges, “and I’ll come to Joe, maybe with no music whatsoever, or maybe with some music that gets completely changed after I show it to him. Or he might have some music that has no lyrics at all, and I might have lyrics in my notebook that I think might fit.”

The group also meets jams regularly, taping the proceedings lest a song that takes shape spontaneously disappear forever. Due to their collective experience, of course, their spontaneity isn’t exactly haphazard. Garrison, for instance, a Memphis native, has drummed with Charlie Rich, Phineas Newborn, Alex Chilton, and, as Hodges puts it, “everybody in Memphis, except Elvis.” As for the bassist, Cabral is quick to point out that Coman’s “solid New Orleans background is really important too.”

“The Velvet Underground,” adds Cabral. “And on top of it all he’s got this extremely solid New Orleans upbringing.”

“He knows all the tunes,” says Hodges.

“All the New Orleans’ standards,” adds Cabral. “He knows a lot of jazz.”

Hodges describes his and Cabral’s common background in terms both cultural (“kind of Mexican-American, Anglo”) and musical: Mexican music, blues, pop radio, Tower of Power, War. “And Joe’s dad is a mariachi musician and has his own band.”

“They do a couple of regular restaurants,” says Cabral, “one in Omaha and one in Lincoln. I was lucky to be a fifteen-year-old kid, or even younger, playing with these really good older guys. They showed me a lot of stuff -- tunes, harmony stuff, how to sing. It was great.”

Not all of the Iguanas’ influences are so exotic. Upon reflection, for instance, Hodges concedes that the title of one new song--“Flame On”--might simply be the result of a childhood spent reading The Fantastic Four. “I never thought about that,” he says, “but that’s probably where the title came from,” adding that the song is really just about people coming to life on the dance floor.

And, the song’s title notwithstanding, it has yet to become an anthem for New Orleans’ gay scene. “But,” laughs Cabral, “it could.”

It could also provide the Iguanas with a most apt nickname: the Fantastic Five.
Posted by The Arse Man at 11:50 AM