Don't Tread on Ted: An Uncensored Interview with the Damnedest Yankee of 'Em All (1992)

(This is a slightly edited version of a piece that ran as the cover story of CAMM's final issue in December 1992. Perennial thanks to John Everson for giving me the assignment--one of my favorite journalistic memories to this day.) 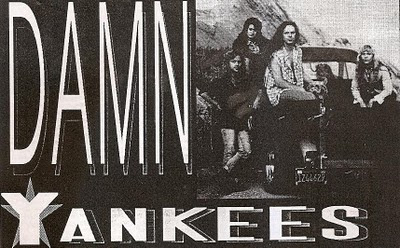 It’s a chilly October morning, and Ted Nugent, fresh from a pheasant hunt on his southern-Michigan property, has some news he’d like to pass along.

“This new record,” he hisses, “is a motherfucker!”

The record, of course, is Don’t Tread (Warner Bros.), the second long-player from Nugent’s current band Damn Yankees. And, as usual, Nugent is absolutely right.

According to Nugent, however, it could have been even better. 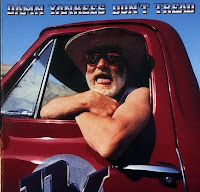 this new album has captured what we’re about,” he explains. “But I still would’ve liked to have heard more guitars and a little more shit on the vocals. Tommy and Jack’s real power isn’t necessarily in their melody, though that is incredibly powerful. Their real power is in their sass, and that only surfaces twenty-five percent of what it could and should.”

Tommy and Jack, in case you’d forgotten, are Styx’s Tommy Shaw and Night Ranger’s Jack Blades. Together with Nugent and the former Eddie Jobson drummer Michael Cartellone, they comprise the best of the current crop of arena-rock-veterans supergroups, a crop of which Bad English, the Storm, Hardline, RTZ, Arc Angels, and, technically speaking, even the Traveling Wilburys are merely the first half-dozen that come to mind.

Does Nugent think a live album would capture Damn Yankees’ other seventy-five percent?

“I’d be willing to try it,” admits Nugent, whose two live albums from the ’70s, Double Live Gonzo and Intensities in Ten Cities, set new standards of the wild-and-wooliness that live albums could contain. “But you’ve gotta realize what a ‘live’ album is. A live album is a live basic track. Then you go into the studio and redo everything.”

“No, they weren’t. They were almost pure. I redid the bass track myself on ‘Baby, Please Don’t Go,’ but that’s about it.”

So why would a Damn Yankees live album have to be different?

“Because of the caution factor in the record industry,” Nugent answers matter-of-factly. “Everybody wants to be really cautious.”

Everybody, that is, except Ted Nugent.

For most of his forty-three years, Nugent has been a hunter, and a big-time one at that. Even now, when Damn Yankees business keeps him busy eight months of the year, he stalks and bags game steadily during the other four. And although he belongs to the National Rifle Association and over a dozen other gun-owner associations, his weapon of choice is the bow and arrow. That’s why, during the first Damn Yankees tour, he was able, night after night, to hit the group’s eight-foot effigy of Saddam Hussein smack dab in the oysters.

That’s also why he has founded the Ted Nugent World Bowhunters Organization (“9,206 members and growing!”) and authored the book Blood Trails: The Truth About Bow Hunting, 120 Detailed Kill Stories.

“This kill is interesting because it was a going-away shot right up the butt at thirty yards,” writes Nugent of his killing of a 250-pound black wild boar. “The big, wide 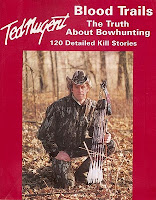 broadhead penetrated all the way to the neck, severing lots of good stuff, and he bled out the front, back, nose, and mouth. He ran only fifty yards before dying.”

Sure beats Leonard Nimoy’s I Am Not Spock.

Anyway, with Hussein now out of fashion, whom does Nugent intend on castrating from the stage this time out?

“Oh, probably stoned hippies on the front row,” he laughs. “I know I’m gonna shoot my guitar with my bow and arrows as part of the stage show, but who knows what might happen?

“The point is that it’s your duty to warn people that Ted Nugent will be armed this year.”

As if his guitar weren’t weapon enough. And now as ever, Nugent credits his gift for unleashing the fury of nature from his guitar to the sensual acuteness that comes from his hunting and drug-free lifestyle.

“It was simple,” he explains. “I love me. I love my music, and I love my waking hours. I love to be able to sneak up to a deer with my bow and arrow. I love the smell and the sight and the sound and the sexuality of life, and I didn’t want any fog rolling into my senses to obscure the experiences therein.

“As a young person--and as a forty-three-year-old young person--I am defiant. I am not a wimp-ass, dickless rebel without a cause. I am a rebel with a cause, and the cause is spelled T-E-fuckin’-D. And if it’s good for me, I will ride it into the sunset. If it’s bad for me, I will shoot it, gut it, and stuff it up your ass. Anybody who doesn’t understand that has got shit for brains. And anybody who decided to laugh at me for not taking drugs I merely looked in the eye and said, ‘Oh well, fuck you! And call me just before you die: I wanna watch.

And as if that weren’t poetry enough, Nugent has a genuine rhyme to cap it off.

Nugent first got together with Shaw in 1988 for an evening of jamming at the urging of the veteran A&R man John Kalodner. It had nothing, according to Nugent, to do with the fact that both his and Shaw’s ’80s albums weren’t selling all that well.

“I had just finished my If You Can’t Lick ’Em … Lick ’Em tour,” Nugent recalls, “a tour I considered to be the best of my life. It was phenomenal! The music, the fun, the short skirts--oh, the short skirts! It was just too much fun for a white guy.”

But Kalodner prevailed, and Nugent did the unthinkable: He spent a night of hunting season not hunting.

“Tommy and I sat down, and literally within sixty seconds. I knew that we’d been weaned on the same R&B stuff. And I realized that Styx hadn’t tapped into even a spit of his talent. We were honky-tonkin’-boogie-woogiein’-Sam-and-Davein’-Wilson-Pickett-and-Motownin’ up a storm!

“I watched him with Styx,” Nugent remembers, “and I knew that when they unleashed Tommy he went head and shoulders above the soulfulness and energy of what Styx could facilitate. And the same with Jack Blades in Night Ranger. When I first heard ‘You Can Still Rock in America’ and ‘Don’t Tell Me You Love Me,’ I thought, ‘Man! These guys kick fuckin’ ass!’ And I knew that the rockin’ Night Ranger stuff was Jack Blades’ real element.”

Ironically, it’s been Blades’ and Shaw’s knack for coming up with chart-topping ballads like “High Enough” and “Where You Goin’ Now” that has greased the Yanks’ multi-platinum skids.

“Let’s be perfectly honest here,” says Nugent. “You can’t have a successful record nowadays without a ballad. But I don’t even consider those songs ballads. I consider them soul songs. We’re just shit-ass lucky that Tommy and Jack can deliver the foundation of these basic, incredible, soul-ballad songs that are vehicles for their incredibly soulful vocals--and that I can jump in with incredibly soulful guitar embellishments and chord changes.”

The reunited Tommy Shaw-less Styx should be so lucky.

“Yeah,” Nugent chuckles. “In order to be in Styx now you have to check your dick in at the door. I always figured, ’Hell, I could’ve been in Styx--if I’d lost my dick in a terrible accident!”

And speaking of testosterone-fueled rock-and-roll, Nugent isn’t particularly fond of Motorhead’s March or Die version of “Cat Scratch Fever” either.

“It just seems that someone neutered their version somewhere along the line. There’s no soul, no sexuality, no groove, and no short-skirt impact. And if it doesn’t have any of those things, I’d rather listen to a bellowing rhino.”

Well, a bellowing rhino and Jackyl, whom Nugent “personally requested” and who along with Slaughter will open all of the ’92-’93 shows on what will be billed as Damn Yankees’ “Uprizing” tour.

Mention of the “Uprizing” tour leads to a discussion of “Uprising” the song (yes, they’re spelled differently), Don’t Tread’s closing track and Nugent’s only lead vocal on the album. It articulates his disgust with the urban jungle in no uncertain terms, a topic that’s particularly fresh in light of the L.A. riots that followed the Rodney King trial last March. Ask Nugent to describe his emotions at the time--especially regarding the savage beating suffered by the innocent bystander Reginald Denny when he was dragged from his construction truck--and his voice drops to a clenched-teeth whisper.

“They were intense as hell itself! I wish that they would’ve tried to drag me out of my vehicle because those animal scum need to know that scum can die too! I’d have shot every one of them motherfuckers right between the fuckin’ eyes. And I would not have run out of ammo.”

Spoken like the true George Bush-supporting law-and-order-loving, former Michigan County Sheriff Deputy that he is. Spoken also liked the guy who thanked Bernie Goetz, the New York City subway rider who shot four alleged muggers in 1984, in the liner notes to his 1986 LP Little Miss Dangerous.

“I live by an all-encompassing, undeniable, bullet-proof law of the land that still exists in the ’90s,” says Nugent. “regardless of concrete-jungle warfare. And I find that I have no conflict at all with Jack, Tommy, or Michael regarding my passions for hunting, self-defense, independence, and productivity. And although it manifests itself in different ways among the four of us, it manifests itself nonetheless.

“We don’t drool on ourselves. We don’t get high and disrespect our God-given senses. Rather, we respect our senses and use them to our best abilities. We believe in our musical statements, in our musical vision, and in how we can help each other make those statements and expound on the various visions that we bring into the group as individuals.

“The difference between Damn Yankees and the hairspray trendsetters,” he concludes, “is that we don’t have boogers coming out of our noses from being hip to the latest drug.”

Point well taken. And in case that Damn Yankees live album ever does get made, what would Nugent like to call it?

And the cover art?