(My first encounter with the great Mr. Chavis, as published in Offbeat ... )

These days, talking with Boozoo Chavis--whose 1954 single "Paper in My Shoe" has been called the "first-ever zydeco hit"--is like talking to Muhammed Ali and Little Richard combined. Like Ali, Chavis likes reminding people that he's the greatest. Like Little Richard, Chavis likes reminding people that younger musicians have become popular by stealing ideas, riffs, and whole songs from him. And like both Ali and Little Richard, Chavis can talk the talk because he has not only walked the walk but also waltzed the waltz, two-stepped the two-step, and rock-and-rolled the Mid City Lanes Rock 'n' Bowl. In fact, at sixty-six, he still continues to put his music where his mouth is.
Later this month, the Warner distributary Discovery Records, in a joint venture with Austin's Antone Records, will release Hey Do Right!, Chavis's ninth album since his return to recording ten years ago. In addition to including a new rendition of "Zydeco Lady"--Chavis's accordion-powered version of the Johnnie Taylor classic "Disco Lady"--it features two of his catchiest animal songs ever: "I Got a Camel" (Chavis's tribute to one of his personal, money-making race horses) and "You're Gonna Look like a Monkey" (the funniest ugly joke set to music since Gillette's "Mr. Personality"). In keeping with his misanthropic outlook, however, Chavis is only partially happy with the album's imminent release. For reasons that he explained in detail from his home in Lake Charles just before Christmas, his reign as the "King of Zydeco" (an honor bestowed upon him by the Louisiana Music Hall of Fame in 1994) has, in many ways, just been one damn thing after another. Not that his many fans will mind, of course, as long as Chavis continues to release one damn good album after another.

Your new album will be your first for Discovery Records after a decade's worth of recordings for Rounder and Floyd Soileau's Maison de Soul. Why the switch?
Well, they [Discovery] paid a little more money, I think. But, anyway, I don't wanna go into all of that. You asked me a hard question right quick!

Sorry.
You know what I'm talkin' about. A lot of times I tell people, "Don't put that in that interview!" But they put that in there, and when it comes out in the paper, I say, "I told them don't put that!" But you said, "What was our reasons [for switching]?" One reason was they paid more money, you know. So my agent and my lawyer said, "Well, make it with Antone's."

There's nothing wrong with selling your music to the highest bidder is there?
But they took a long time before they come out with the doggone record! They took over a year-and-a-half to get the damn record out. Now, you see, I'm talking too much right there. But you asked me why we switched companies, and I tell the truth.

Were your experiences with Rounder and Maison de Soul better?
Rounder is good. Floyd Soileau is good. But I made a record with Elektra [1990's Boozoo Chavis], and they haven't paid me yet! I still ain't got my royalties.

You recorded Hey Do Right! a year-and-a-half ago?
Well, it took that long for them to get the thing together. We cut the album in May, and now we're way over here in January. We cut it in maybe twenty-five or thirty minutes!

But it's forty-three minutes long.
People said they'd never seen a man cut an album like that in the studio.

Was that the fastest you'd ever made a record?
I think I made one album faster than that at Maison de Soul.

Is it true that Hey Do Right! has already come out in Europe?
Yeah, they got it in Europe. Antone's has got some companies over there.

"You're Gonna Look like a Monkey" is a good song. Is there a story behind it? Were you singing to anyone in particular?
No, no. I ain't gonna put that. There is a story behind that, but I ain't commentin' on none of that. I give all my information away in interviews.

What do you mean?
That's the biggest thing that ever hurt me, that I talk too much, and I tell 'em too much, and then they know too much.

Who's "they"?
Keith Frank, Geno Delafose--all them guys. They get all my music, you understand? I tell on this and I tell that, and then everybody learns it and copies off of my music. Some of my fans from Washington, D.C., and New York know better. But the people in Lafayette and all that think these guys can outplay me! And I was elected in the Music Hall of Fame.

You were crowned "King of Zydeco."
Yeah. And there was a magazine that came out in Lake Charles last week. It talked about me and Clifton Chenier, not none of them punks. You asked me why did I switch companies. You know why? Because these young guys are runnin' around, cuttin' in Opelousas, in Lafayette, in Mamou, and in Church Point, and they're all makin' some little rinky-dink albums. They come up with a few new words, and they copy my music. Then they get booked to play in places over me! Even Offbeat put Beau Jocque over me. You see what I'm sayin'?

How does what you say in interviews affect this situation?
There's people come from New York to interview me at my house. We drink coffee, we sit down, we talk, and I tell 'em this and that. They ask me how zydeco first started, how did I make "Paper in My Shoe," and all that. I tell them, "Paper in My Shoe" 'cause my feet were cold. Didn't have no socks or none of that to put my foot in. Just the paper and put my own best shoes, you know?" People come from everywhere to interview me. Or they interview me on the phone. But they ask me some questions that makes me angry.

Sorry again.
Not you. It's O.K. for Offbeat. Every time we go to Mid City Bowl I pick up one. We got a bunch here, yeah. But every once in a while they got one come from another magazine. You know, I'm sixty-six years old. In other words, they don't treat me right.

We've would've requested this interview sooner, but we were waiting for Hey Do Right! to come out in this country.
It's good, isn't it?

Very good.
It's goin' like mad over there in Europe. I been playin' it in the dances so long that by the time the record comes out, it'll be old. They take so damn long to put it out! Floyd Soileau told me, "Boozoo, you coulda cut three albums with me in the time it takes them!" And I sure coulda. It don't take me but twenty minutes in the studio, man! I got my song in my head.

How exactly do the younger zydeco musicians make use of your ideas?
They take my song, or parts of it, and they change it. One time John Delafose asked me to play a number. He said, "Boozoo, I'm kinda tired." And I didn't think nothin' of it. He said, "You wanna play a couple?" I said, "Yeah, man!" Boy, and I was feelin' good! I went up there and played my number. And he took it and cut it before me! But I can outplay all of 'em! Day and night! They can't play by themselves. I can play by myself. All them musicians out there now, they gonna have to go to school again.

That sounds like quite a gift.
Oh, yeah. Most of my songs, I get 'em off the bandstand. They come to me. I'll be playin' 'em right there, and my band will look at me and don't know what I'm playin'. But I'll keep playing it, and then I put it on the record. I'm sixty-six. I been playin' fifty years. Some of these guys started playing two years ago, three years ago, five years ago. I was playin' before they was born! And I try to tell people that! But they'll book them before me because they don't wanna pay me. They'll give them five, six-hundred dollars, and they gotta pay me two thousand. They're just tired of payin' me. I don't care who else you get. Get all you wanna get. But when I go, pay me.

Why did you disappear in the thirty years between your 1955 recordings (released by Rounder in 1990 as Lake Charles Atomic Bomb) and the 1986 Louisiana Zydeco Music recordings?
I got mad, I got disgusted, and I quit.

Why were you so mad and disgusted at such a young age?
They stole my money. They didn't pay me for "Paper in My Shoe."

Speaking of "Paper in My Shoe," did you, as legend has it, really get so drunk at the end of the session that you--
Fell off of my stool?

Where did that story come from?
It come from Eddie Shuler [the session's producer], but it ain't true. I been playing music for fifty years, and I never fell down yet.

Did you give up music altogether during your thirty-year hiatus?
No, I played some dances around here.

Why did you decide to get back into the music in the mid-'80s?
I just wanted to show the world what I could do.

In which cities do you go over the best?
All of 'em. 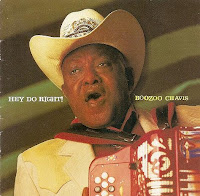 Considering all the aspects of the contemporary zydeco scene that irritate you, what is it about making zydeco music for a living that keeps you doing it?
Well, zydeco is getting popular more and more, but not in youngsters. They like my music, but they'd rather dance with Keith Frank music, the youngsters. People don't know nothin' about music. All they want is that jumpin' music 'til they're jumpin' like a bunch of horses on the floor. They don't know what zydeco music is. If they did, they would say I was the best.