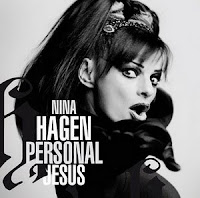 Back in the early ‘80s, a friend of mine used to play the records of Nina Hagen (pronounced “Hog-in”) whenever the parties he was hosting had gone on too long and he wanted to drive the remaining guests away.

And Hagen's records always did the trick.

They’d also have the neighbors calling the cops. “Excuse me, sir,” the officers would say when they arrived, “but we’ve received complaints that you’ve been feeding demon-possessed cats into a meat grinder.”

She doesn’t sound that way anymore.

On her new album, Personal Jesus, she sings exclusively in English. And if at fifty-five she can still evoke fantasies of a hung-over Marlene Dietrich throwing a tantrum after a particularly harsh night of über-decadence (her every vowel sounds as if it’s wearing an umlaut, and she really gets off on rolling her r’s), what she’s delivering now is lyrics like “God’s radar is fixed on you!”

In other words, if you reacted to the news that the woman who gave us Nunsexmonkrock was releasing a gospel album by thinking it was going to be--oh, I don’t know, sarcastic or something--you’re wrong. She was baptized into the Protestant Reformed Church of Schüttorf last year (sounds like a total-immersion denomination to me), and apparently the sacrament really took hold.

Personal Jesus is a punk album in drumming and overall high-energy level only. What it really is, is the jumpingest left-field-holler gospel album since Gordon Gano put the Violent Femmes on the back burner to record The Mercy Seat.

And Personal Jesus is better.

Bookending the many trad.-gospel chestnuts familiar to anyone who has ever attended Baptist churches or summer Bible camps (“I’ll Live Again,” “Down at the Cross,” “Just a Little Talk with Jesus,” “Take Jesus with You”) are two terrific obscurities, which Hagen resurrects with a zeal entirely befitting a follower of the Man who coaxed Lazarus back for an encore. The afore-cited Rev. Dan Smith’s “God’s Radar” kicks the album off to chiming acoustic guitar strums before shifting into chili-pepper zydeco, and Marion Williams’ naughty-sounding slow, late-night blues, “Sometimes I Ring Up Heaven,” ends it. The context they create even makes “All You Fascists Bound to Lose” sound as if it could’ve been penned by someone who’d someday father the Arlo Guthrie of Outlasting the Blues (which, in fact, it was).

And the Queen drum thumps that open her version of Blind Willie Johnson’s “Nobody’s Fault but Mine” will rock you.

But what really dropkicks this album through the goalposts of life is Hagen’s version of the title track. Coming from Depeche Mode, “Personal Jesus” has always sounded like a heavily ironic anti-televangelist screed. Coming from Hagen, it’s a pounding rocker that could have forgiven sinner-women everywhere wishing they could wash Jesus’s feet with their hair.

Rating: Five bulwarks never failing out of five.
Posted by The Arse Man at 7:15 PM