Ever since Joni Mitchell accused Bob Dylan of being a fake and a plagiarist in the Los Angeles Times last month (http://www.latimes.com/entertainment/news/music/la-et-jonimitchell-20100422,0,5684541.story?page=2), Dylan fans have rushed to their hero’s defense. His use of other people’s words, they say, merely puts him in the folk-blues tradition, wherein the line between love and theft is so thin that if it were a man Dylan would’ve called him “Mr. Jones” and written a ballad about him by now.

Still, the list of authors from whom Dylan is said to have stolen recently, even in his Chronicles Volume One memoirs, is daunting. Ovid, Jack London, Chaucer, Proust, Henry Timrod, Junichi Saga—you don’t need to go to college ’cause Dylan is the book of knowledge!

So how is it, with all of the Google-using private eyes intent on unearthing even more of Dylan’s sources, that the nearly all-pervasive plagiarizing Dylan did in “writing” the songs for Slow Train Coming (1979), Saved (1980), and Shot of Love (1981) has gone completely undetected?

I too might have remained blissfully oblivious to this stratum of Dylan’s literary offenses if I hadn’t, just a few weeks ago, found myself stuck inside a motel room with the nothing-to-read-but-the-local-phonebook blues (again). (There was, of course, a TV in the room, but I’ve always believed that sometimes you’ve got to do like Elvis did and shoot the damn thing out.) Anyway, I began going through the dresser drawers, hoping that maybe a previous tenant had left a newspaper behind, when I came upon something even better: a book.

I’d never heard of it (Holy Bible) or its author (Gideon something), but when you ain’t got nothin’ else to read, you got nothin’ to lose. So, without thinking twice, I dove in.

The title of the first section was “Genesis,” so I was expecting something about Peter Gabriel, Phil Collins, Tony Banks, Mike Rutherford, maybe Steve Hackett—about anyone, in other words, but Bob Dylan. Midway through the second chapter, however, I came upon the following sentence: “And Adam gave names to all cattle, and to the fowl of the air, and to every beast of the field….” Hmmm, I thought. Where have I heard that before?

Eventually, it hit me: “Man Gave Names to All the Animals.” Track eight on Dylan’s Slow Train Coming.

At first I thought the similarity was a coincidence. Not only was there no mention of “Adam” in Dylan’s song, but Jackson Browne and Blink 182 had written entire songs mentioning “Adam” (“Song for Adam” and “Adam’s Song” respectively). So if Dylan was a plagiarist, surely they were too.

I kept reading, and for awhile everything was fine—or at least as fine as anything that’s full of lip-smackingly lowest-common-denominator sex and violence can be. (Personal to Gideon: I’m no prude, but if you ever expect Hollywood to option your work, you might want to tone down the sex and violence. The public’s tolerance of Brokeback Mountain is no guarantee that they’ll put up with filmed versions of the episodes in your book wherein the daughters of Lot get pregnant by date-raping their own father.)

Eventually, though, I got to this passage from the section called “Joshua”:

Or, as Dylan put it in Slow Train Coming’s “When He Returns,” “The strongest wall will crumble and fall to a mighty God.”

I shut Holy Bible. Then I opened it again. Repeatedly. At random. In a section called “Ezekiel” I read “[A]nd I will take away the stony heart out of your flesh, and I will give you a heart of flesh” and heard Shot of Love’s “Property of Jesus” (“You’ve got a heart of stone”). In another section (“Ephesians”) I read “For we wrestle not against flesh and blood, but against … spiritual wickedness in high places” and heard Slow Train Coming’s “Precious Angel” (“Now there’s spiritual warfare, flesh and blood breaking down”). In yet another (“1 Corinthians”) I read “[Charity] beareth all things, believeth all things, hopeth all things, endureth all things” and heard Shot of Love’s “Watered-Down Love” (“Love that’s pure hopes all things, / believes all things, won’t pull no strings…”).

By the time I quit playing Spot the Plagiarism, I’d found over fifty passages in Holy Bible that were suspiciously similar to lyrics I'd long assumed Dylan had come up with on his own. Some of the similarities were admittedly tenuous (cf. “Thou shalt break them with a rod of iron…” [“Psalms]” and “The iron hand, it ain’t no match for the iron rod” [“When He Returns”]; “Blessed are the pure in heart: for they shall see God” [“Matthew”] and “Try to be pure in heart, they arrest you for robbery” [“The Groom’s Still Waiting at the Altar”]). Others, however, indeed the majority, were nearly identical.

The album on which Dylan did the most verbatim stealing was Saved. The title track alone has four offending passages: “By His spirit I’ve been sealed” (Dylan), “[I]n whom also, after that ye believed, ye were sealed with that Holy Spirit of promise…” (“Ephesians”); “I’ve been saved / by the blood of the lamb” (Dylan), “And they overcame him by the blood of the Lamb, and by the word of their testimony…” (“Revelation”); “He bought me with a price” (Dylan), “For ye are bought with a price: therefore glorify God in your body, and in your spirit…” (“1 Corinthians”); and “Not by works / but by faith in Him who called” (Dylan), “For by grace are ye saved through faith; and that not of yourselves: it is the gift of God: not of works, lest any man should boast” (“Ephesians”).

But the song “Pressing On” has just as many such passages (e.g., “Well I’m pressing on / to the higher calling of my Lord” [Dylan] and “I press toward the mark for the prize of the high calling of God in Christ Jesus” [“Philippians”]), as does “Are You Ready?” (e.g., “Will He know you when He sees you, / or will He say, ‘Depart from Me’?” [Dylan] and “[T]hen will I profess unto them, I never knew you: depart from me, ye that work iniquity” [“Matthew”]). And two other Saved songs, as you can see from the tables below, have even more. (Click to enlarge.) 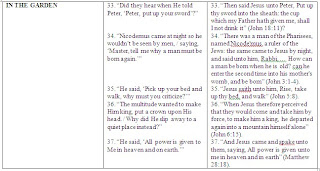 Oh yeah, I almost forgot—Dylan also plagiarized from Julia Ward Howe (Dylan: “Are you ready for that terrible swift sword” [“Are You Ready?”]?; Howe: “He hath loosed the fateful lightning of His terrible swift sword…” [“The Battle Hymn of the Republic”]), Martin Luther (Dylan: “Satan got you by the heel, there’s a bird’s nest in your hair” [“Dead Man, Dead Man”]; Luther: “You cannot keep birds from flying over your head but you can keep them from building a nest in your hair"), and the songwriting team of Joel Hirschhorn and Al Kasha (Dylan: “I believe in you even on the morning after. / Oh, when the dawn is nearing, / oh, when the night is disappearing…” [“I Believe in You”]; Hirschhorn/Kasha: “There's got to be a morning after / if we can hold on through the night” [“The Morning After”]).

I know what you’re thinking: Has Dylan no dignity? Is there no limit to the stickiness of his lyric-writing fingers? As a loyal Dylan fan, I started to think up excuses. Life is hard, I reasoned. Besides, in his busy schedule there’s often simply no time to think--of original lyrics or anything else. Or perhaps he simply no longer trusts himself. Heck, maybe he doesn’t even know he’s using other people’s words. It’s obvious, after all, that he truly loves the phrases (he wouldn’t use them otherwise), and true love does tend to forget.

But, lo and behold, just when I thought I was on the verge of being able to justify what I’d found as “poetic license” (some of it, not all of it), I discovered the worst plagiarism of all.

At first “A Satisfied Mind,” the lead track on Saved, set off no alarms, probably because its lyrics didn't overlap with Holy Bible. But I soon realized the reason they didn't: All of its lyrics come from a song with the exact same title by Red Hayes and Jack Rhodes!

Obviously, after having gotten away with his teenaged stealing of “Little Buddy” from Hank Snow (whose material was quite well known), Dylan figured he’d have no trouble getting away with stealing a song from two songwriters few people had ever heard of (cf. Hirschhorn/Kasha).

And, equally obviously, Dylan was wrong. But we can’t, in good conscience, say we weren’t warned. “People don’t do what they believe in,” he sang in “Brownsville Girl.” “They just do what’s most convenient. Then they repent.” And in “Positively 4th Street,” “If I was a master thief, perhaps I’d rob them.” Is it his fault we weren’t listening?

No. But it is his fault that he put other people’s words in his own mouth, copyrighted them as his own, and was therefore complicit in letting entire generations think that in those words we were seeing the real him at last and that his ghost was more real and genuine than all the dead souls on the boob tube.

Unbelievable? Not really. Can I forgive him? I don't want to do it, but maybe. Someday. Until then, though, toleration of the unacceptable still leads to the last round-up, and this is one new pony who plans to make like all the wild horses as long as he can fox-trot, lope, and pace.
Posted by The Arse Man at 10:10 AM