O.K., so Syndicate has taken the sixteen-year Christian-rock veterans Eddie DeGarmo and Dana Key to task for being jingoistic and superficial from time to time.

But that was then and this is now. Not that they don’t write jingoistically and superficially anymore, but they’ve gotten really good at it--as their new album, To Extremes (Benson), amply proves. At its best, it ripples with muscular, bluesy hard rock and lyrics forged in the heat of the struggle to live a holy life.

"We feel that our lyrics are intriguing," says DeGarmo. "If they weren't we wouldn't get the thousands of letters that we get every year."

"At the same time," adds Key, "We don't want it to take somebody an hour to figure out what we're trying to say in a three-minute song. We're in the business of communicating a message, and we want to make it as clear and unmistakable as possible."

Proof that they've succeeded in their mission can be found both in the number of award nominations they've racked up--three Doves and six Grammys so far--and in their impressively detailed Christian radio track record, a record to which To Extremes has already added. "Judgment Day" recently reached the top five, and "Stressed," one of the hardest, bluesiest DeGarmo & Key singles ever, will probably do the same.

"I'm proud of the fact that we've had over sixty top-ten radio songs in our career," says Key. "And I'm also proud that while our albums may have three or four radio singles on them, there are also seven or eight songs on there that have a great deal of depth."

"I don't think you can really make records predicting what you think other people will like,” says DeGarmo. " I think you can only make records of what you like and hope that other people will like them. We just do what we do best. I mean, we're definitely blues-influenced and rock-influenced. We're not a really good pop band, and we're not a really good rap band. But we are a pretty good rock band."

Some have wondered then, if indeed D&K's strengths do indeed consist in making "really good rock," why the duo continues to write for teens, for whom "rap" and "pop" rule. To many, after all, D&K are as famous by now for their youth-group musicals as they are their rock-and-roll muscle.

"Most forty-year-olds are paying on a mortgage, not buying rock music," says Key. "And most people, by the time they're twenty-five, have made most of their spiritual decisions. So it's important for us to reach people while they're young."

The implication is that perhaps some of contemporary Christian music's more self-consciously "alternative" bands aren't trying to reach people, that by trying not to proclaim their faith in an old-fashioned way, these bands may not be proclaiming it at all.

"Not only don't they say anything," insists Key, "but nobody knows that they're not saying anything because nobody ever buys the records."

"Many times," DeGarmo adds, "non-writers think that the challenge is to be vague and esoteric. They think that's difficult. But from a writer's point of view, that's simple. The challenge is--" 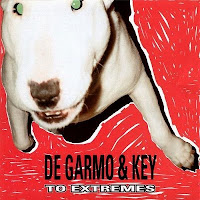 The ten songs on To Extremes exemplify concision. At an average length of just over three-and-a-half minutes, they flout the CD-era wisdom that says the more the better. Yet each song packs a wallop. "Hyper-faith" chugs along atop a modified "Paperback Writer" riff, "Dangerous Place" atop a modified "Peter Gunne" riff, and "People Got to Be Free" atop--what else?--a "People Got to Be Free" riff.

“It's weird how many people think that Eddie and I wrote 'People Got to Be Free,'" says Key of the 1968 Rascals classic. “It’s scary."

"I already got blasted for that [song] once," admits DeGarmo. "I was at the Southern Baptist Convention, and this guy came up to me and said, 'Man, I love your version of "People Got to Be Free."' But then he said, 'How do you deal with the theology of "I'll do unto you what you do unto me"?' I said, 'I don't know, man. We didn't write the song. We just like the way it sounds. Quit picking it apart.'"

DeGarmo's easy-going approach to secular music doesn't stop with the Rascals. Unlike Key, who's even written a book on the insidiously destructive values of secular rock, DeGarmo practically revels in the inclusiveness of his collection and the degree to which he hasn't interfered with what his own two kids listen to.

"I've got every kind of music in my house," admits DeGarmo, "from Aerosmith to Amy Grant."

"I wouldn't have Aerosmith in my house," says Key.

"Oh, I do. I've even got the Soup Dragons. I pride myself on staying up with what's going on. I own it all, and I've never stopped my children from listening to it. Instead, I've tried to teach them what it means. We've gone to all kinds of concerts together."

"I think I'm a pretty conservative dad," DeGarmo continues. "I've just not made that big a deal out of it with my kids. I've tried to teach them what Scripture says about those things, and I've allowed them, within reason, to come up with their own notions of what those things mean. And it hasn't become an issue. I've made more of an issue out of their learning to be like Christ and how to walk with him and read Scripture. I've always pointed to the good rather than the bad, and it seems to have worked. Not that I don't censor them from some things. I do."

"You're tough, man," jokes Key, who also keeps up with current music, but for different reasons.

"I have a radio program where I review secular music. So I have to go get the top ten every two or three weeks to see what people are listening to and review it. But I wouldn't have my kids listen to ninety percent of it."

Has he had any pleasant surprises?

"Oh yeah. There's some stuff out there that's probably fine. You take a Pearl Jam album, for instance, and eighty percent of the lyrics are fine. It's just that one oddball song, like 'Drop the Leash' or something like that, that ruins the record."

Such records might explain the presence on To Extremes of the anthemic "Rebel for God," which begins, "I bought a brand-new CD .... The band was preachin' anarchy," and features the refrain, "Throw away the lies you're believing / Throw yourself into the Savior."

"I don't know why groups find it necessary," says Key, "to put eight great tunes on an album--and then two that use the f-word thirty-seven times."

Despite the Southern Baptist who objected to "People Got to Be Free," D&K's association with that denomination has at least one positive aspect. Along with Newsboys, DC Talk, and other Christian musicians, the duo has signed on as spokesmen for the Southern Baptist-affiliated True Love Waits campaign, a program designed to help kids abstain from sexual intercourse until marriage.

At a recent TLW rally on the lawn of the National Mall facing the Capitol, D&K performed an hour's worth of new and old material in front of twenty thousand kids. More than an electric rehearsal for their upcoming Acoustic Cafe Tour, the set served to underscore D&K's commitment to teenagers.

"A lot of those kids look to us as heroes and role models," says DeGarmo. "This was a chance for us to look up to them. I respect those kids. They're going against popular culture to say they're not going to sleep with their boyfriends or girlfriends. Obviously, that's not what the movies or rock bands or rap bands teach."

"We said a few words of encouragement," says Key of the performance. "Basically, though, by the time we came on, it was to celebrate the fact that there were 211,000 pledge cards, on which kids had made a commitment to remain abstinent until marriage, staked to the ground."

The kids, in other words, were taking things "to extremes."

And after sixteen years as extremists themselves, DeGarmo and Key couldn't be happier.