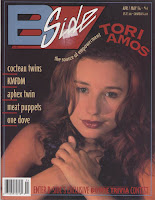 During my years of writing for B-Side magazine, the editors imposed several silly style rules.  One was to refer to musicians by their first names.  (Had they interviewed Dylan, they’d have written, “Bob bristles when asked for the millionth time to explain ‘Desolation Row’”).  Another was never to write “said” or “says” in a direct-quotation tag, even though writing anything else usually causes readers to pay undue attention to the verbs.
As originally published, the piece that follows adhered to those two rules.  As slightly edited below, I’ve amended most of the quotation tags.  I have not, however, changed the first-names approach because, oddly enough, it seems to work in this context.  At any rate, I hope you enjoy what you’re about to read.

Those who track the movements of alternative music’s restless muse tell us that Chapel Hill, North Carolina, qualifies as one of several college towns in contention for the title of the “next Seattle” (a title formerly known as the “next Minneapolis” and the “next Athens”).  These muse trackers cite as prime evidence Icky Mettle, the Alias Records debut of the sub-poppier-than-thou Chapel Hill racket makers Archers of Loaf, three of whom inaugurated their Christmas season by phoning this magazine from their manager’s house for a short winter’s chat and, simultaneously, watching Rudolph, the Red-nosed Reindeer.

“Oh!  Rudolph, the Red-nosed Reindeer with Burl Ives is comin’ on!” exclaims Matt Gentling, the band’s bassist, in the middle of his fellow Archer Eric Johnson’s explanation of how he makes his guitar sound like an air-raid siren on the song “Hate Paste.”

“That’s that little noise thing that Eric made,” observes the drummer, Mark Price.

“He wants to know about my brilliance, guys!” Eric objects.

“I want to be a dentist!” Matt interrupts again, mimicking the misfit elf on TV.

“What were you saying about the drummer?” says Mark.

You get the idea.  One would hardly mistake an interview with the Loaf for an episode of Firing Line.  “We might as well go ahead and warn you that we always confuse interviewers,” says Eric (whom we shall henceforth refer to as “Eric J.” to avoid confusing him with the band’s lead-singing lyricist, Eric Bachmann).  “We’re very sarcastic.  Beware.” 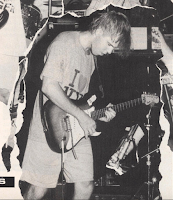 Back to the air-raid-siren guitar sounds on “Hate Paste.”

“Then you get a dual motor crossover,” adds Mark.

“What you get is a sub-divided matrix,” adds Matt.

“What happens,” says Eric J., “is it’s impossible to have no delay time in a repeat.  So the peddle just starts, like, makin’ all this noise, and if you have a fresh battery in there—”

“—it’ll start screamin’, and boy does that get me off!”

One should not assume from such banter that “Hate Paste” is the only Icky Mettle track to feature skronky guitar sounds.  Indeed, all thirteen songs—from the catchy, previously-available-as-45s “Web in Front” and “Wrong” to the downright entropic “Fat” and “Backwash”—bulge with the shrieks of tortured amps.  But just as essential are Eric Bachmann’s weird lyrics and the plaintively hoarse way that he shouts them in a sometimes vain attempt to be heard over the aforementioned guitars.  It was, in fact, the coming together of the two Erics in late ’91 that launched the entire Loaf concept, giving the quartet’s on-again, off-again involvement in various combos going back to high school a splattery, post-punk shape.

Eric B.’s absence on this night precluded questions about what he means when he sings lines such as “All I ever wanted was to be your spine.”  But Matt, Mark, and Eric J. have plenty to say about their frontman nevertheless, starting with the “intellectual” look lent him by his wire-rimmed glasses.

“He has a big tattoo on his butt that says ‘Pain,’” says Mark.

“That’s what it’s all about,” says Mark.

The trio’s discussion then moves on to the topic of Eric B.’s lyrics, lyrics that, although Matt, Mark, and Eric J. did not feel at liberty to discuss them, they discussed anyway.

“We try to keep them all the way down in the mix,” says Mark.

“We’re looking for a new frontman,” says Matt, “so if you have any suggestions—”

How about Randy Bachman?

“From Bachman-Turner Overdrive?  He’d be a frontman-and-a-half.  You don’t happen to know his number, do you?” 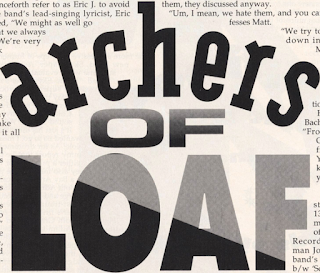 Icky Mettle hit the stands on September 13, approximately six months after Archers of Loaf signed to Alias Records.  The Alias A&R man John Wells heard the band’s first single, “Wrong” b/w “South Carolina” on the Stay Free label, and came to see the Archers play.  Before long, they’d joined the Alias roster.  And although it was recorded in March 1993, Icky Mettle still represents, according to Eric J. and Matt, what the band does onstage.

“We’ve evolved from one side to the other,” laughs Matt, “not necessarily up or down.” 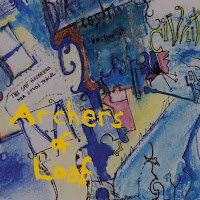 “Like, we’ve gotten a million times better, I think.  But as far as the songs that we’re recording now, it’s weird.  We have a couple of singles about to come out, and those are a pretty even mix of brand-new songs and really old songs.”

“I like his lyrics because they’re pretty open to interpretation.  Usually, they mean something personal to him, but you can’t get too specific about them because they weren’t intended that way, I don’t think, unless maybe for his own use. 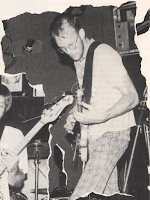 “‘Web in Front,’ however,” he says on second thought, “does refer to an obscure Russian novel.”

The other news about the Archers has to do with the seven-week tour that they completed just after Thanksgiving.  It amounted to their most extensive jaunt ever.  And while it provided plenty of thrills, it also provided monotony and exhaustion.

“So in total,” Matt calculates, “it felt as if we were gone six months.”

And for those who still need a reason to trudge out and see the Loaf when they next hit the road in the spring, the following observation might serve as the ultimate motivator: They sound a lot like the Replacements probably did between Hootenanny and Let It Be.

“When I went to high school, they were like my personal messiahs,” Matt recalls.  “I worshiped them.  They’re like a significant portion of my life.  Yeah, that’s cool as hell, man.  I don’t mind being linked with them at all.”

Nor should those interested in the sound of the next Seattle mind being linked with Archers of Loaf, whether by concert ticket, CD player, or a love for Rudolph.