NINE UNPUBLISHED REVIEWS (OF MINE) FROM 2018


For one reason or another, the following 2018 reviews that I wrote for WORLD went unpublished.  I present them here for your delectation. 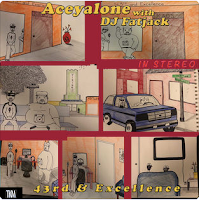 “I’m old skool, so what?” announces Aceyalone at the outset, and he’s serious.  There isn’t one of these 16 tracks that he couldn’t rap uncensored on network TV, and the music—yes, music—flows as smoothly as he does.  How smoothly?  “You do it, and you don’t think about it,” says a jazz interviewer in the context of discussing Coltrane (“Doing or Judging”).  How old skool?  Both “Saturday night, my name on the poster” and “Sunday morning, crab cakes, Mimosas” rhyme with “Love in my holster” (“Bang Bang”). 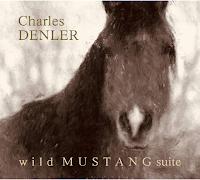 The title of the second movement of this album’s title suite, “All Creation Breathes,” provides an apt metaphor for Denler’s expansive, windswept piano-and-orchestra music.  Uncluttered enough to qualify as New Age but detailed enough to evoke the undomesticated grace of its equine subjects, it serves as a conduit for breath-like melodies that stop short of over-romanticizing by not lasting long enough to “over” anything.  The average length of the 13 pieces: two minutes.  The exception: an opening fanfare of which Elmer Bernstein would approve. 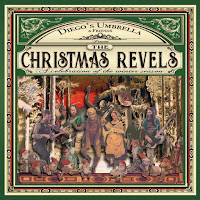 The season’s most earthily festive offering comes courtesy of musicians billing themselves “San Francisco’s ambassadors of gypsy rock,” although they’re more “gypsy” than “rock,” what with fiddles, rudimentary percussion, the Hanukah tango “Ocho Kandelikas,” the alms-giving round “Christmas Is Coming,” and a lustily sung “Lord of the Dance” making mincemeat of commonplace decorum.  Only “Sleigh Ride” and “It’s Beginning to Look a Lot like Christmas” fail the revel test.  Everything else—the carols, “Auld Lang Syne,” and John Lennon’s “Happy Xmas” included—feels freshly and vigorously hewn. 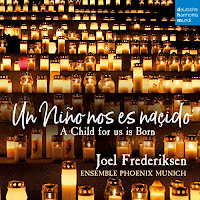 The 19 selections by at least 16 composers (the Anonymouses and questions regarding who composed the infectious “Ríu Ríu Chíu" complicate the math) flesh out the subtitle: “Christmas Music of Spain and Latin America from the 16th and 17th centuries.”  The four-part singing, like the period-faithful instrumentation and the texts, is reverently solemn but not severely so—“Dadme albricias” practically gambols.  For that matter,
portions of Bartomeu Càrceres’s 10-song medley “La Trulla” (which combines Christological precision with, believe it or not, bunion humor) do too. 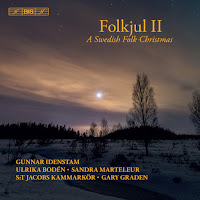 The metaphysically suggestive sonorities of nine of these 17 selections arise from the 28 dynamics-spanning voices of Stockholm’s S:t Jacobs Kammarkör and Gunnar Idenstam’s rumbling Allen Q350 digital organ.  The metaphysicality of the changes of pace, whether sprightly or hushed, owes a good deal to the lithe expressiveness of Ulrika Boden’s voice and Sandra Marteleur’s violin.  “In dulci jubilo” provides the melody most likely to be recognized by non-Swedes.  The full-ensemble rendering of Martin Luther’s “Från himlens höjd” will leave even the garrulous speechless. 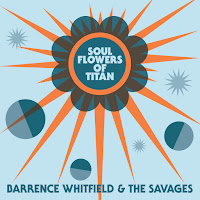 Peter Greenberg (guitar) and Phil Lenker (bass) continue to supply most of the originals.  Together or apart, they account for one third of these raucous, headlong plunges into the heart and soul of rock and roll.  Whitfield, meanwhile, remains more than happy to shout his way to their core and out again.  That’s “out,” incidentally, as in “far out” if one is to take Greenberg/Lenker’s “Let’s Go to Mars” literally.  Of the covers, the Willie Wright beats the Hank Ballard, and the Finley Brown beats them both. 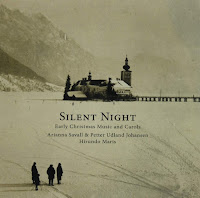 Hirundo Maris is an early-music/folk-music ensemble co led by Savall and Johansen, who get top billing because, in addition to playing harps (Savall) and the Hardanger fiddle and mandolin (Johansen), they do the singing (in multiple languages, no less).  But while the purity of their voices makes an ideal vessel for lyrics celebrating the virgin birth of Christ, what most evokes the unigue mystery of the event is the sounds of their bandmates’ citterns, flutes, whistles, border pipes, mute cornetts, dobros, bells, claves, and ayoyotes. 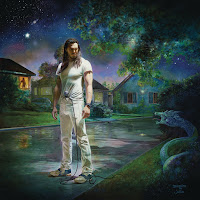 Andrew W.K. is a one-man power-of-positive-thinking movement, accessorizing his power-metal career with motivational speaking and an advice column.  But despite the simplicity of his message, it could use a glossary.  By “party,” for instance, he means “Celebrate life.”  By “devil,” he means anything negative that makes people stronger because it hasn’t killed them.  “After all,” he says in one of the spoken interludes on his new album, You’re Not Alone (Sony), “these ups and downs aren’t here to hurt us.  They’re here to thrill us, to make the rollercoaster ride of life even more interesting and spectacular.”
Deep?  No, and utterly without grounding in any philosophical or theological framework as far as W.K. takes it.  The thing is, he admits as much, even titling one new song “I Don’t Know Anything.”  It’s this open-hearted simplicity that makes one want to root for him—and his music an ideal soundtrack for doing so. 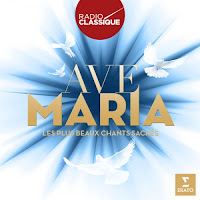 Between the extremes of Mariolatry on the one hand and, for lack of a better term, “Mariphopbia” on the other is the honor due Mary by followers of her Son who would perfect their imitation of Him in all things, including His observance of the Fifth (in some traditions the Fourth) Commandment.  It is in this spirit that many of the “Ave Maria”s, “Salve Regina”s, “Regina Coeli”s, and “Stabat Maters” were composed, and it’s that spirit that those compositions can fortify.
Available as 54 tracks on four CDs or as 61 downloadable mp3s, Warner Classics’ Radio Classique: Ave Maria—Les Plus Beaux Chants Sacres compiles performances circa 1961-2014 of works spanning every century from the 14th (the Llibre Vermell de Montserrat) to the 20th (Natalie Dessay singing Philippe Rombi, various choirs singing Rachmaninoff, Poulenc, Jolivet, and Davies).  Over half of the texts derive from Luke 2:28 and 1:42.  They’ve seldom sounded so rich for so long.