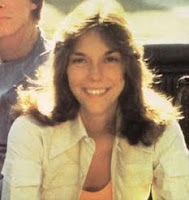 When she was young, she'd listen
to the radio. When she was older,
she was the radio. She'd listen
and hear herself. She told her-
self that this was as good as
listening to someone else. Her
voice became voices, each less
hers than the one before. Over-

dubbed, she thinned out. Wired,
she shorted. Older still yet still not
old, she saddened and grew tired
of turning the radio off. It
kept coming on by itself. It kept
dreaming her while she slept.
Posted by The Arse Man at 8:42 PM