In 1992 I had the privilege of writing for the short-lived Chicago Area Metal Magazine (or CAMM) under its editor John Everson. Besides the two features I wrote for it that allowed me to interview Fiona Flanagan and Ted Nugent respectively (to be posted here as soon as I can type them in), I also got to review albums (see below) that I otherwise wouldn't have been able to. The best perquisite, however, was getting to write for CAMM's big-sister publication--the Illinois Entertainer--after CAMM folded, a gig I began in 1993 and that I still value and enjoy. Thanks, my Windy City friends!
...............
Black Sabbath 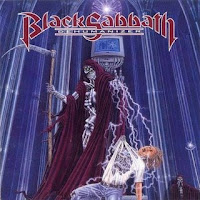 Dehumanizer (Reprise)
Paranoid is the best Sabbath ever because, twenty-two years on, it still lives up to its name. On it, the Ozzy Osbourne-led lineup boiled irrational fear about Viet Nam, the afterlife, and a future with or without drugs into a caldron of bad vibrations so strong that even now most metal sounds pansified next to it. This album, which reunites the Dio-Iommi-Butler-Appice lineup of Mob Rules under the under-exploited production hand of Mack, tries hard to resurrect the old dread, and at times it comes close. The twin eternity-in-hell songs, “Too Late” and “Buried Alive,” might spook unbelievers in a weak moment, and “TV Crimes” (a metal “Personal Jesus”) works up a lather as well as a sweat. Take it as a testament to the group’s former glory, then, and not as an affront to its current mechanical heaviness, that nothing here will make you forget how Sabbath used to come on like a force of nature. 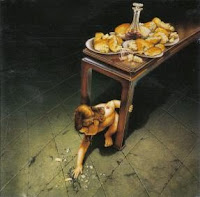 King’s X
King’s X (Atlantic)
By now the themes (redemption and its discontents) and the sound (soulful heavy-metal thunder shot through with Beatle-esque lightning) that made this power trio’s songs unique have lost their novelty--if not necessarily their entertainment--value. Whether the blame lies with Messrs. Pinnick, Tabor, and Gaskill or with their longtime producer Sam Taylor is hard to say. But four albums on the same job can dull even the sharpest reflexes, and the absence of both sparkling ballads (cf. “Summerland”) and lengthy instrumental freak-outs (cf. “Moanjam”) suggests someone should take a break. Or a hike.
Monster Magnet 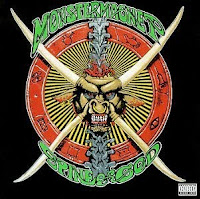 Spine of God (Primo Scree/Caroline)
Of the dozens of long-haired, spaced-out, zombie-metal bands currently citing Sabbath’s Paranoid as an inspiration, these boys are the only ones who seems even remotely capable of improving on it. From their motto (“It’s a Satanic drug thing--you wouldn’t understand”) to their well-chosen cover tune (Grand Funk’s “Sin’s a Good Man’s Brother”), they churn out a dark, seething murk that’s only intermittently lit up by David Wyndorf’s gutturally emoted “explicit lyrics” before they’re swallowed right back up again by the clouds of locomotive breath sprawling forth from John McBain’s guitars. 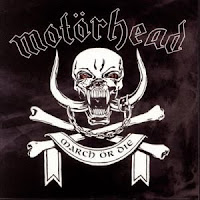 Motorhead
March or Die (WTG)
The pre-release publicity made much of Philthy Phil’s latest abandoning of the drummer’s chair and of Phlegmy Lemmy’s plans to cover “Cat Scratch Fever.” Well, anyone who after fifteen years of listening to Motorhead still has hearing acute enough to notice the new drummer has been missing the point, and although Lemmy says his “Cat Scratch Fever” sounds the way Nugent’s should’ve, he’s wrong. The real news here is that “Bad Religion” wins the best-in-show prize among the current crop of anti-TV-preacher songs (cf. Black Sabbath, Genesis) by sampling Robert Tilton and that Lemmy’s duet with Ozzy Osbourne (“I Ain’t No Nice Guy”) proves he can go all mellow and heartfelt without succumbing to the melodrama of “1916.” Elsewhere, Wurzel and Zoom live up to their names, and the band still sounds the way it looks: mean, ugly, and in no mood for crap.
Motorspycho
Wrenched (Hollywood)
Their name guarantees that stores will file them right after Motorhead, which is no accident, I'm sure. But surly, unkempt appearances aside, this quartet's still a few musical miles shy of Lemmy and the gang. The problem's not the sound; the veteran metal producer Jim Faraci gets serious juice out of the standard two-guitar-bass-and-drums attack. Neither do the guys lack chops. Larry Hernandez howls and growls like a truly unpleasant fellow, and the guitarist Dave Krocker plays like one to the solo born. The problem is the formulaic, post-modern biker-metal songs. Nothing here sounds like the next big thing. Or the next little thing, either. The next tiny thing, maybe. Here's hoping they grow.
Praxis 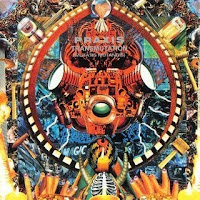 Transmutation (Axiom)
This noisy exercise in metallic free jazz recalls the voodoo vibeology of those ’70s Miles Davis LPs that Chuck Eddy called “metal” in Stairway to Hell. Everyone--including (and maybe especially) a mad guitarist named Buckethead--sounds as if he’s improvising while on acid, and if the combo sometimes skronks its way into the abyss, there’s no denying the metal crunch of “Blast/War Dub Machine,” “Interface/Stimulation Loop,” or “Crash Victim/Black Science Navigator.” (How could there be with titles like those?) Bernie Worrell’s organ is more souped up than Keith Emerson’s, and there are fewer quiet parts than on Houses of the Holy. If you’re still not sure this disc belongs between Poison and Prong on your shelf, remember that its producer, Bill Laswell, also oversaw Motorhead’s Orgasmatron all those years ago. 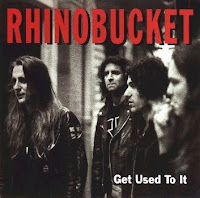 Rhino Bucket
Get Used to It (Reprise)
Unwashed, unkempt, and fueled by too much booze, nicotine, and sex, these four Van Nuys guttersnipes probably don’t have long to live, and they sing and play as if they know they don’t. Georg Dolivo pushes his shredded vocal chords past the threshold of pain, and both he and Greg Fields slap together power chords from the bottom of the rock-and-roll barrel. Titles like “She’s a Screamer,” “The Devil Sent You,” and “This Ain’t Heaven” summarize their experience with groupies, and the closest they come to a ballad is the affectionately titled “Stomp,” in which they strip Guns N’ Roses’ “Rocket Queen” of everything but the rhythm track and the orgasmic chick. So call it scuzz-metal to die for and hope they survive long enough to get the joke.
Skatenigs 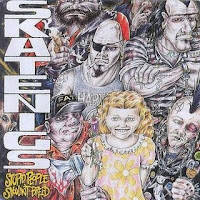 Stupid People Shouldn’t Breed (Megaforce)
From the groupie who kicks things off with beat poetry to the Jim Carroll impersonator who’s horny for evil, from Critter and Fluffy’s postmodern sampling to Phildo Owens’ way with a rap, this album reclaims the artsy high ground from techno-wimps without conceding one Richter Scale degree of skate-metal’s woofer-rattling power. The lyrics, meanwhile, manage the considerably less impressive trick of encrusting the Good Ship Anarchy with those pesky barnacles called clichés.
Soul Kitchen
Soul Kitchen (Giant)
They look like metal and they're named after a Doors song, but their roots, as Jeff Wilson sings in "Carry Me," stem from their being "raised on blue-eyed soul," by which they apparently mean Small Faces, Humble Pie, and early Rod Stewart. Such influences might explain Wilson's raspy-throated belting but not necessarily why he's good at it, why the band prefers electrified boogie to metal cliches but not why they sound unusually accomplished for a rookie act. Obviously, this stuff's a throwback, but like the Black Crowes, Soul Kitchen transforms their love for British Invasion blues-rock and Southern-fried funk into songs whose riffs, hooks, and verbal imagery challenge rather than worship the conventions. And it's definitely significant that, although the songs range from four minutes to six, none of them feel as if they go on too long.
Izzy Stradlin and the Ju Ju Hounds
Izzy Stradlin and the Ju Ju Hounds (Geffen) 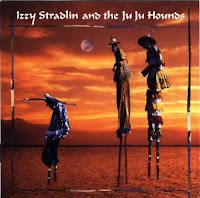 If it’s hard to imagine from the sound of it that Stradlin could’ve cut his Guns N’ Roses stuff sitting down, it’s harder yet to imagine that he could’ve cut this stuff standing up. In striving for the burned-out, hung-over, raspy-throated groove that his idols Keith Richards and Ron Wood achieve naturally, he captures too much of their punch-drunk wooziness and not of the moss-dislodging fight that keeps Stones rolling. In other words, Stradlin sounds about twice as old as he is, a sound rendered doubly sad because that’s how he probably feels. But at least as an ex-Gun N’ Rose he has an excuse, something his second guitarist, the ex-Georgia Satellite Rick Richards, doesn’t--considering how long he’s been unemployed, he should have lots of fresh energy stored up. On the plus side, both “Buck o’ Trouble” and the Hounds’ take on Toots Hibbert’s “Pressure Drop” pack a punky punch, and the Gratefully Deadened Bo Diddley shuffle of “Time Goes By” feels all right too, in a burned-out, hung-over, raspy-throated kind of way. It’s just weird to realize that these songs are all the guy who wrote “Pretty Tied Up” wants to use his illusion for.
Tourniquet 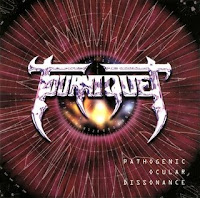 Pathogenic Ocular Dissonance (Intense)
Album number three finds Guy Ritter and his fellow vegetarian, Jesus-worshiping, non-fur-wearing mosh monsters whipping their splattery squall into a ferocity only hinted at on albums one and two. Not only do drummer Ted Kirkpatrick and bassist Victor Macia pound like an impending embolism, but the frazzled high end glistens like gelatinous tubercles of purulent ossification. (No, I don’t know what any of those terms mean--I was just quoting song titles.) The lyrics are better too. Instead of the likes of “Jesus came once to save you. / Turn away and he’s gonna slay you” (from Stop the Bleeding), we get spooky narratives. In one a soldier who feels a body part where he shouldn’t because it got blown off in the war; in another some kids are haunted for years by nightmares resulting from their having played Uncle Wiggily. Add to these ingredients Ritter’s improved hell-hound singing and the emergence of hummable melodies, and you have an example of ruminating virulence--or is that spectrophobic dementia?--at its finest. (Ya gotta love those titles.) 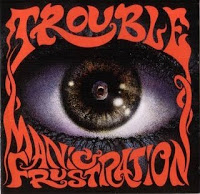 Trouble
Manic Frustration (Def American)
Why does this greater-than-the-sum-of-its-parts album sound better than it is? Because by excavating and lubricating an actual groove from beneath Trouble’s raging tonnage and layering everything else on top of it, Rick Rubin has tooled this band into a heavy-metal locomotive that only derails when it slows down.
Posted by The Arse Man at 11:09 AM