(As published in the Illinois Entertainer....)
....................
Fans of rock 'n' roll often fail to notice country music until a novelty song like "Elvira" or "Achy Breaky Heart" crosses over and becomes a major annoyance. That, however, says more about the myopia of rock 'n' rollers than it does about country music, which for decades now has been the one tributary of American popular music guaranteed to float the boat of those who feel, for whatever reason, that the mainstream has left them high and dry.
Two years ago, David Ball found himself atop the crest of country's current wave with a chart-topping single ("Thinkin' Problem") and a platinum album. On the cover, his Johnny West face looked out from beneath a Stetson hat with an expression that said, "You don't know me, but admit it, I look the part. Tell you what, how 'bout you give this album a listen and tell me if I don't sound the part, as well?"
Those who took Ball up on the offer found him to be more than a role player. After all, not only did he sing in a piercing tenor voice that had folks wondering what he could do with the Nashville phone book, but he also wrote or co-wrote nine of the album's ten songs. He looked and sounded, in other words, like the total country package, an impression that the success of Thinkin' Problem's first three singles confirmed.
Then, all of a sudden, there followed what Ball calls "a six-month period where there was no David Ball music out there." "We had success with the first three songs," he recalls. "Then we released a couple that we didn't have any success with. We put out one called 'What Do You Want With His Love'--one of my favorite tunes on the album--and it did really well in certain parts of the country. But then other parts of the country wouldn't touch it. I don't know why. I think a lot of it was that Garth Brooks had just released--" Ball catches himself in mid-complaint, aware of how fast blaming one's woes on the best-selling solo artist in the history of popular music can become a knee-jerk excuse.
"Then after 'What Do You Want With His Love,' " he continues, "we had another single that we didn't get anything with. Then another couple of months passed until Starlite Lounge came out. So actually it's been like a seven or eight-month period not to have anything on the radio. That's a long time."
It is, but as he says, Starlite Lounge, his new album, has come out, and although it has yet to yield a "Thinkin' Problem"-level smash, it's a better album than its predecessor. For one thing, Ed Seay and Steve Buckingham, the album's producers, assembled a team of studio pros capable of deepening and widening Ball's neo-honky-tonk sound without overapplying the shellac. For another, in contrast to the first album, which was consumed with the memory of love gone bad, Starlite Lounge features songs like "Hangin' In and Hangin' On," "Circle of Friends," and "Bad Day for the Blues," songs that celebrate love gone good or at least love not gone bad yet. And one of the two drinking songs ("The Bottle That Pours the Wine") isn't even a drinking song at all but a metaphorical tribute to the mysterious craft of songwriting.
"As a writer," Ball explains, "you learn what's true. It doesn't have to be about something that happened to you exactly, but you have to be able to recognize the truth--what's real and what is not. When you're writing, you're in a different world, but it's definitely a very real place."
Ball knows that place well. Between 1989 and 1994, when he wasn't "going down to Austin and gettin' with [his] buddies and playin' clubs," he wrote songs--lots of them. "I'd signed with a publishing company, and they gave me the opportunity to come off the road, and I got to write songs every day. It was about, oh, a little over a year of nothing but writing. That's when I wrote 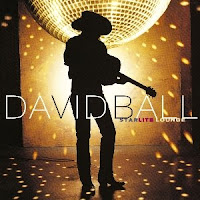 all the stuff that was on Thinkin' Problem."
Like the songs on Thinkin' Problem, the songs on Starlite Lounge find Ball writing in collaboration with the likes of Tommy Polk and Billy Spencer and, more often than not, striking a near-perfect balance between playful punning and poignant concision. Couplets like "I'm just a square in her circle of friends, / but when we're all alone, Lord, I fit right in" and "If you want someone who'll leave you, / you'd better look to someone else" capture Ball's knack for packing multiple meanings into plain language. Any more embroidery--in the lyrics, the phrasing, or the playing--and the album would lurch toward smarm.
Ironically, Ball had no hand in writing "Hangin' In and Hangin' On," his new single and arguably Starlite Lounge's strongest song. A husband's plea for his wife not to throw in the towel on their troubled romance, it sets the album's tone. Almost every other song seems to serve as a vignette within the "Hangin' In and Hangin' On" scenario.
"I thought that if I was gonna try and do another 'Thinkin' Problem,' that song would be it," Ball admits. "The first time I heard it, I thought it was really different. It's unusual. I hadn't heard anything like it, and I think that's important in country music. I think the complaint that everything sounds alike in country music comes from the fact that, musically, there's no newness. At the same time, people are sayin', 'There's too much pop influence.' Well, here's 'Hangin' In and Hangin' On,' which is new country music but which is not influenced by cheesy '70s pop. It's rooted in traditional music, but it's brand new. It's like Hank Williams meets the '90s."
To better prepare his fans for this "new" music, Ball has spent the past couple of months on the road opening for his Warner-Reprise labelmate, Dwight Yoakam. With almost every stop on the tour a stadium, amphitheater, or pavilion gig, Ball finds himself performing in environs quite different from the central-Texas dancehalls in which he paid his dues.
"When I was in high school," he says, recalling his South Carolina youth, "I played string bass in a folk band, and that band moved out to Texas. We went out and played a couple of folk festivals in Texas, and I just fell into that scene out there in Austin. George Strait was out there playin', and, of course, [Asleep at] the Wheel. Even the old guys. Some of the original [Bob Wills] Playboys were playin' in dancehalls. I loved it. I've always been a fan of the older stuff."